4 Ways the Senate Could End Taxpayer Funding of Planned Parenthood 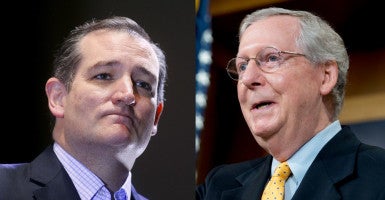 As the war on Planned Parenthood heats up, so does the Republican divide on how to best go about taking away the organization’s federal funding.

Leadership in both chambers of Congress signaled they’re willing to go only so far in their fight to strip the organization of its government dollars—putting them at odds with conservatives who are willing to do whatever it takes.

Given past support for pro-life legislation like the 20-week abortion ban, a defund bill would likely make its way through the House unscathed.

Republicans in the Senate, however, lack the 60 votes needed to pass pro-life legislation, forcing those who want to take away Planned Parenthood’s $500-million government funding to get more creative.

Here are the four ways the Senate could go about ending taxpayer funding for the group, which has come under scrutiny after the release of a series of videos that show top officials discussing the sale of body parts from aborted babies for research. Planned Parenthood has denied any wrongdoing.

At the beginning of August, just before the Senate left for its summer recess, a bill to strip Planned Parenthood of its federal funding fell short of the 60 votes needed to advance. The legislation had the support of 53 senators, with one pro-life senator absent from the vote.

Senate Majority Leader Mitch McConnell, R-Ky., voted no, a move that allows him to bring the bill back for a vote this fall.

This move signals the possibility that McConnell will bring back the same legislation when Congress returns, but conservatives aren’t crazy about the idea.

Even if the bill made it through the House and the Senate, President Obama would likely veto a standalone measure that defunds Planned Parenthood.

This makes any standalone vote more symbolic of the desire to defund Planned Parenthood than practical, because the measure will never be signed into law, therefore the organization would continue to receive its federal funding.

Instead, conservatives who are serious about stripping Planned Parenthood of its government funding say the initiative must be attached to a larger matter.

Every year, Congress must consider a range of what’s considered “must-pass” pieces of legislation.

Congress routinely attaches unrelated measures that may not be able to pass on their own to “must-pass bills” in order to pressure acceptance of those measures by Congress and the president. This is why year-end spending bills that prevent a government shutdown are often packed with unrelated measures.

Last year, the spending bill—formally known as a Continuing Resolution—passed with dozens of unrelated measures, such as banning the Obama administration from transferring detainees from Guantanamo Bay to the U.S.

Seeing as government spending runs dry on Oct. 1, conservatives see a ripe opportunity to attach a defund bill to that measure.

“It’s real simple,” Rep. Jim Jordan, R-Ohio, told The Daily Signal. “You pass the appropriations bill at the amount that everyone’s agreed to. Most likely it will be a CR [continuing resolution] … but you simply say the money that would have gone to Planned Parenthood, we’re going to put in these community health centers. And there’s your bill.”

Jordan was referring to the thousands of community health clinics that provide women’s health care for free or at affordable costs and are qualified to receive federal funding.

The problem with this route is that if Democrats object to the inclusion of such measure—which they’ve signaled to be the case—it could lead to a government shutdown. If Oct. 1 arrives and the president hasn’t yet signed a spending bill, all discretionary spending in the government that isn’t used to protect life or property becomes frozen.

In 2013, when the government shut down over the Affordable Care Act, many thought Republicans bore the brunt of the blame. Heading into the 2016 election cycle, GOP leaders appear desperate to avoid a similar situation.

House Speaker John Boehner told press he wants the multiple House investigations into Planned Parenthood to play out before stripping the group of its federal funding. McConnell said bluntly the GOP shouldn’t shut down the government over the issue.

“We’ve been down this path before,” he said in August. “This is a tactic that’s been tried going back to the ’90s, frequently by Republican majorities that always have the same ending: that the focus is on the fact that the government is shut down, not on what the underlying issue that is being protested is.”

But Jordan, who represents a group of conservatives in the House Freedom Caucus, argues that’s not the case.

If conservatives are unable to cast the blame on Democrats and Obama, they have one more opportunity to attach a defund bill to must-pass legislation this fall.

In October, Congress is likely to take on the Highway Trust Fund bill, which is another piece of must-pass legislation.

As leader of the Senate, McConnell controls the legislative agenda of their respective chambers and gets to decide whether amendments will be allowed in certain pieces of legislation.

In July, for example, when the Senate was voting on a highway bill, McConnell blocked an early attempt to end taxpayer funding for Planned Parenthood. At the same time, he attached an amendment resurrecting the controversial Export-Import Bank. Because McConnell’s in charge of procedural rules, those who disagreed with the move couldn’t do anything about it.

For this reason, conservatives would prefer attaching the defund amendment to the must-pass spending bill.

If all other attempts fail, conservatives could invoke a little-known budget strategy at the end of the year called reconciliation. Once the GOP sets the budget for its overall spending levels each year, the Senate is allowed to make policy changes within that budget for standalone measures using reconciliation. To do so under reconciliation, they need only 51 votes instead of the typical 60 needed to pass legislation, clearing an easier path to the president’s desk.

But because this works only for standalone measures, conservatives believe that it would be an easy veto for Obama and, similar to a standalone bill, more symbolic than realistic.

In this case, there’s no risk of a government shutdown, but with less risk comes less reward.

UPDATE Sept. 21, 2015: Since the publication of this story, Republican leadership has proposed using reconciliation to strip Planned Parenthood of its federal funding. Conservatives and others have pushed back against using the budget tactic, arguing it would “open up the flood gates so everyone’s pet project is added to reconciliation.”