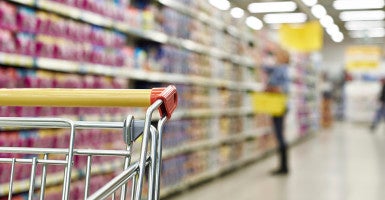 Food stamps is one of the largest means-tested welfare programs. (Photo: sergeyryzhov / iStock)

Good news: The number of Americans using food stamps in 2014 declined slightly from the previous year. So why does the 2015 Index of Culture and Opportunity say this indicator is headed in the “wrong direction”?

There are a couple of reasons. For one, the food stamp program (officially known now as the Supplemental Nutrition Assistance Program, or SNAP) is still much larger today than it was a decade ago—or, indeed, just a few years ago. In 2008, it was below 30 million. By 2013, it had hit 47.6 million.

It has since dipped a bit, as I mentioned (to 46.5 million). But for it to still be so high, despite an improving economy, is certainly troubling.

“The program may appear to be on the right track,” Maura Corrigan, a visiting fellow at the American Enterprise Institute, writes in the index. “But it is far from perfect and traveling much too slowly.”

Unemployment has dropped in recent years, yet still—far too many people are participating. One out of every seven Americans received SNAP benefits in 2014, and the program cost $74.1 billion, making it one of the largest means-tested welfare program.

You’d think the improving jobs situation would translate to the number of SNAP beneficiaries declining by a much larger margin. But that hasn’t been the case.

Another reason for saying that food stamp numbers aren’t really going in the right direction? Look at how the SNAP demographic has changed.

Before the 2008 recession, 55 percent of SNAP households consisted of children and the elderly. Now, however, a slight majority of recipients are non-elderly, able-bodied adults. There has also been an uptick in the number of working-age, able-bodied adults on SNAP who are not working.

Why? What explains the climbing numbers of non-working, non-elderly, working-age SNAP recipients?

At least part of the reason can be traced to the waiving of work requirements for childless, able-bodied, working-age adults during the recession. Simply put, we’re not requiring those who are able to work to do so.

This is clearly a mistake. Able-bodied adults receiving food stamps should be required to work, prepare for work, or do a job search. Look back at what happened in the 1990s. The great welfare reform of 1996 was put into law, reforming the largest cash welfare assistance program (Aid to Families with Dependent Children or AFDC, which is now Temporary Assistance for Needy Families). Rather than allow the government to continue fostering dependency, we started insisting that non-disabled adults either work or be looking for work in exchange for benefits. And lo and behold, the numbers dropped.

SNAP wasn’t reformed to include a work requirement like AFDC was, but if you look back, you notice a significant drop in the SNAP rolls in the late 1990s, too. It fell below 20 million, to a level even lower than we saw in the late 1980s.

SNAP should be reformed to include a work requirement for able-bodied adults. Loosening the requirements with waivers and relaxing the rules hasn’t helped anybody, from the taxpayers who are asked to pony up more and more money to the recipients who soon find themselves trapped in a cycle of poverty that often stretches across generations.

According to Corrigan, a former state human services director who administered more than 70 federal means-tested welfare programs: “Our nation’s simple three-word mantra should be ‘better off working.’ Social safety-net programs, including SNAP, should expect and encourage work—and the dignity and responsibility that accompany it—from those who are able to do so.”

The key, after all, is to promote self-sufficiency as much as possible. Some people will never be able to provide for themselves, but we should do all we can to extend some basic dignity to those who can.