This Government Jobs Program Is Ineffective, Ridden With Crime 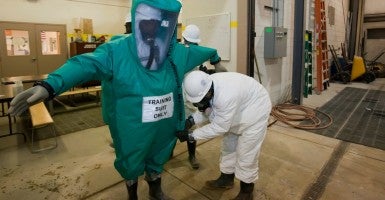 A job training program for disadvantaged youth—sounds like a good thing. Except maybe when it is plagued by violent crime and doesn’t boost participants’ wages or help them secure full-time jobs.

Each year, Congress spends in excess of $1.65 billion on Job Corps, even though Department of Labor research found years ago that Job Corps does not provide the skills and training necessary to substantially raise the wages of participants.

The Washington Post has reported on the extent of violence within Job Corps. This summer at a Miami Job Corps center, 17-year-old Jose Santos Amaya-Guardado was lured to a prepared grave site by 20-year-old Kaheem Arbelo and three other students.

After hacking Amaya-Guardabo to death with a machete, Arbelo and his accomplices placed him in the grave and set his body on fire.

In St. Louis, a 20-year-old student shot his Job Corps roommate in the chest. Last year in Oregon, a male security guard pleaded guilty for raping a female student.

As official policy, Job Corps is supposed to have zero tolerance for violence and illegal drugs. However, a Department of Labor inspector general report found otherwise.

An audit, released in February, found that Job Corps centers frequently failed to report and investigate serious misconduct like assaults and drug abuse that require mandatory expulsion from the program. Further, violent transgressions were often downgraded to avoid holding the perpetrators accountable.

Over the course of two fiscal years, the inspector general found that over 35,000 serious misconduct incidents occurred at Job Corps centers.

Federal job-training programs have a long history of failure. Job Corps is not at all different. A scientifically rigorous impact evaluation of Job Corps found:

When it does succeed, the cost is enormous. The inspector general estimates that each Job Corps participant who is successfully placed into any job costs taxpayers $76,574.

While the idea of Job Corps helping disadvantaged youths learn new job skills to move up the economic ladder may sound nice, the reality doesn’t live up to the promise.

Good intentions are not enough; results matter. Job Corps is not producing a worthwhile return. Moreover, in many cases, Job Corps students are subjected to harmful and dangerous environments. Given our $18-trillion and growing debt, Congress should put this wasteful program on the chopping block.