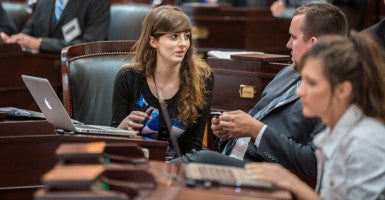 VALLEY VIEW, Ohio—It’s the morning after the first Republican presidential debate and Adam Josefczyk is full of energy. Following a late night in Cleveland, the 26-year-old is not wasting any time as he seeks to build a stronger conservative movement in the Buckeye State.

Frustrated by the political establishment and career politicians devoid of principles, Josefczyk and co-founder Justin Powell set out to shake up Ohio politics by investing in its youth. Their newly formed organization, Forge Leadership Network, is already working with 45 young people from Ohio and neighboring states. Josefczyk wants to double that number next year and spread the movement beyond Ohio to other states in the Midwest.

Over breakfast at a diner in this small village on the outskirts of Cleveland, Josefczyk introduced two of his star pupils: Peter Lyons and Rachel del Guidice. Lyons, a homeschooled high school student who is starting his senior year, has his sights set on several options after college, including seminary. Del Guidice, a senior at Franciscan University of Steubenville, got hooked on politics after a Washington, D.C., internship at the Family Research Council.

Lyons and del Guidice are the type of young people whom Josefczyk wants Forge to attract: They have a passion for politics, hold strong conservative beliefs, and exhibit the ambition to be future leaders in a state where the farm team needs replenishing.

In its first year, Forge relied heavily on a strong word-of-mouth campaign to recruit students. The 45 who were ultimately selected participated in a four-and-a-half-day summit in July at the Statehouse in Columbus.

Josefczyk, who serves as Forge’s executive director, is now working to provide year-round support through a mentorship program that gives these young conservatives an edge.

“Once you’re a Forge fellow, you’re always one,” he said. “We want to serve as a temp agency for them to open doors and help them get connected. We’ve already placed students in internships at great conservative organizations.” With the mentorship program, Josefczyk hopes to provide the career advice and counseling for young conservatives that he thinks is lacking in Ohio and the nation. Ultimately, he believes, this will give them a better chance at success—and eventually build a bigger network that keeps the farm team fully stocked.

The Inspiration Behind the Idea

Josefczyk is a lifelong Ohio conservative who graduated from the University of Dayton and settled in the city with his wife Jessica, his college sweetheart. After graduation, he worked at a Christian ministry for college students and taught at Dayton Christian High School, where he’s still the head coach of the varsity golf team.

It was a little more than three years ago when he got involved in Ohio politics. Josefczyk helped run a friend’s primary campaign, which led to a role with Citizens for Community Values Action, where he oversaw grassroots outreach in 2012.

Working with two other conservatives, Forge co-founder Powell and Michael Hamilton, Josefczyk founded the Ohio Conservative Review to report and comment on the news.

These experiences gave him an up-close look at Ohio politics—including what he viewed as the state’s shortcomings. “We had a lot of young people with conservative convictions and a desire to be engaged in public square—people who really buck the stereotype of college students,” Josefczyk said. “At the same time, these young people were getting disillusioned or burned out because of their involvement with party politics. They didn’t want to help someone move up the political ladder who wasn’t fighting for the principles they believe in.”

The lack of this farm system—a term typically used in sports—prompted Josefczyk to act. He saw great programs in Washington, D.C., but none happening in Ohio.

“We started talking about the need for this about a year ago,” said Wesley Goodman, a Forge board member who previously worked for Rep. Jim Jordan in Washington. “When you have young people who are coming of age in Ohio and the Midwest, it’s important for us to identify, equip and train this next generation of leadership. And that’s not just in politics. It’s in business, industry, ministry, culture and media.”

The highlight of Forge’s work so far is the summit, which ran from July 14-18 in Columbus. Josefczyk spread word throughout the Midwest about the opportunity, drawing students from as far as Nebraska and Missouri to Ohio for the four-and-a-half-day event.

Students stayed at Ohio Christian University and interacted with state leaders on the floor of the Statehouse for two days. It was an intense experience with a lot of activities and little sleep, but one that del Guidice said was worthwhile.

“I was really intimidated,” del Guidice said. “But by the end, I learned more in those four days about government than I did in high school or college. You really begin to understand how things work.”

The legislative simulation put students in committees to craft bills and debate legislation. There was disagreement on many issues, including proposals on the militarization of police and the Article 9 convention. Each summit participant had to draft a mock bill to debate before a committee. (Photo: Danny Woods/Woods Media Productions)

“Being on floor and going through the process with bills we passed in committee was pretty amazing,” Lyons said. “That was unique. I didn’t expect to do that.”

Del Guidice said it was particularly helpful to have six state representatives interact with the students. They worked together in committee rooms, providing advice on how to navigate the legislative process.

In addition to spending time at the Statehouse, students heard from national leaders about a range of topics. The Heritage Foundation’s Heather Pfitzenmaier, director of the Young Leaders Program, was among the speakers. Representatives from Alliance Defending Freedom did media training to help students hone their message.

Goodman, who recently moved back to Ohio from Washington, was among the speakers. He told the students about the importance of staying engaged and active.

“It’s just not enough to be a Republican or even a conservative anymore,” he told The Daily Signal. “You have to be willing to stand up and fight for what you believe in to win these cultural and political arguments so we can have a bigger impact. That’s really what we’re trying to [do] with Forge.”

As they head back to school, Lyons and del Guidice will have the benefit of working with a mentor over the coming year. Josefczyk has also tasked them with spreading the message about Forge to recruit new people for next year’s summit.

Lyons, who was one of the youngest people at the summit, already has deeply held convictions about politics and the role he wants to play in the future. Peter Lyons, a high school senior, was one of the youngest participants at Forge’s summit. (Photo: Danny Woods/Woods Media Productions)

“Our relationships are inherently political,” Lyons said. “The only way a society can survive is if enough people participate in political process. In America, that’s how it works. I feel the need to be well-informed because it’s the duty of educated man to contribute to his country.”

And that’s ultimately what Josefczyk wants Forge participants to take away from the experience.

“We’re not training 50 students a year to run for office,” he said. “Yes, some of our students will be the next principled statesmen and stateswomen. But we want to have others who are titans in private sector, in media, sound legal minds defending the Constitution, and a lot of different vocations.”

In the case of Lyons and del Guidice, for example, a political career might not be in their future. But whether it’s a pastoral position for Lyons or journalism job for del Guidice, they’ve both found something of value from Forge.

“It does not matter if you want to be a doctor, legislator or banker—you’ll learn so much about the process by going to Forge,” said del Guidice. “It’ll make your life richer because you experienced it.”

“The beauty of Forge was not that I learned a lot about politics. Politics is not for everybody. What Forge offered me was a birds-eye view of our country from a classical standpoint. If you don’t understand those principles, you can’t be a good American citizens who fulfills your responsibilities.”

Forge shared this video with The Daily Signal featuring some of the summit’s participants:

This story was updated to include Justin Powell’s name as a co-founder of Forge and include photo credits for Danny Woods and Jena Powell.