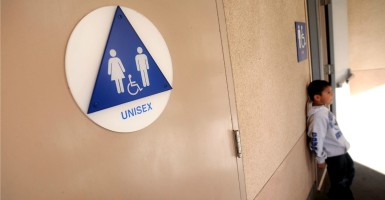 Alliance Defending Freedom has asked the Hillsboro R-3 School District Board of Education in Missouri to change a recent policy that allows students to use restrooms designated for the opposite sex. (Photo: Andy Holzman/La Daily News/ZUMAPRESS/Newscom)

A Missouri school district is under fire for allowing students to use restrooms and locker rooms designated for the opposite sex.

Alliance Defending Freedom has sent a letter to the Hillsboro R-3 School District asking the board of education to change its recent decision.

“Protecting students from inappropriate exposure to the opposite sex is not only perfectly legal, it’s a school district’s duty,” ADF legal counsel Matt Sharp said in a statement. “Letting boys into girls’ locker rooms and restrooms is an invasion of privacy and a threat to student safety.”

Opponents of policies allowing students to use facilities designated for the opposite gender say that such policies violate student privacy and can endanger students.

“Instead of protecting children, the school district is needlessly creating an environment that invites violations of student privacy,” said ADF senior legal counsel Jeremy Tedesco in the statement. “The first duty of school district officials is to protect the children who attend school. The ADF model policy demonstrates that schools can accommodate the desires of a small number of students without compromising the rights of other children and their parents.”

Supporters of policies allowing students to use bathrooms and locker rooms designated for the opposite sex argue that it creates an inclusive environment for transgender students.

According to the National Center for Transgender Equality:

In the letter to school district officials, Sharp and Tedesco, along with other signatories, write that “[w]e seek to reaffirm the commonsense proposition that compelling students to share restrooms and locker rooms with members of the opposite sex violates their right to bodily privacy and would not only lead to potential legal liability for the School District and its employees, but would also violate students’ and parents’ fundamental rights.”

They argue that “no federal law requires public schools to open sex-specific restrooms, showers, and changing areas to opposite-sex students,” and “providing such access violates the fundamental rights of the vast majority of students and parents.”

The writers propose an alternative policy, which they argue will “accommodate students with unique privacy needs, including transgender students, while also protecting other students’ privacy and free exercise rights, and parents’ right to educate their children.”

They promise that their proposed policy “serves to better insulate your Districts from legal liability,” and that if the policy is legally challenged, they will “review the facts and, if appropriate, offer to defend your District free of charge.”

A Hillsboro school district official did not immediately return a request for comment.