Memo to Obama: It’s Not Iran Deal Critics Who Are the ‘Crazy’ Ones 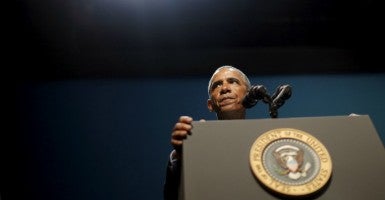 Just back from his annual summer vacation at Martha’s Vineyard, President Barack Obama has returned to disparaging his political adversaries and anyone who happens to disagree with him on policy.

According to a report in Politico, the president has taken to describing opponents of the hugely controversial Iran deal as “crazies.” The so-called “crazies” now include a majority of members of the House and Senate, a large chunk of the American electorate according to opinion polls, and the government of Israel, led by Prime Minister Benjamin Netanyahu.

It is significant that several leading figures in the president’s own party have declared their opposition to the Iran deal, including Charles Schumer, the senior senator for New York, and Eliot Engel, the ranking Democrat on the House Foreign Relations Committee from New York.

Obama’s remarks, made at a conference hosted by Senate Minority Leader Harry Reid, D-Nev., in Las Vegas on Monday, echoed his American University speech on the Iran nuclear deal in early August, where he compared critics of the deal to Islamist hardliners in Tehran who chant “death to America.”

Obama isn’t interested in outlining a coherent case explaining why the agreement with Iran advances America’s interests and national security—because it clearly doesn’t.

Instead of maintaining the pressure on Iran to end its nuclear program, after years of the United States and its allies painstakingly building an international sanctions regime, the White House has opted for a policy of surrender.

Resolve has been replaced with reckless appeasement—and a determination to strike a deal at any cost with a tyrannical regime that views America with hatred and contempt.

There is every reason why the deal negotiated between the E3/EU+3 Group (the United Kingdom, France, Germany, Russia, China, and the United States, with the high representative of the European Union for foreign affairs and security policy) and the Iranian regime has been strongly opposed on Capitol Hill and is viewed with tremendous skepticism by the American people as well as by key U.S. allies in the Middle East.

This is a disastrous agreement that leaves Iran’s nuclear infrastructure largely intact, in effect leaving Iran in a position to produce enough weapons-grade uranium for a nuclear bomb within a year if it chooses to renege on the agreement, which is highly likely. Under the deal, Iran gets to maintain 6,000 operational centrifuges, with the remainder of its 19,500 centrifuges kept in storage.

In addition, the agreement fails to place any restrictions on Iran’s development of intercontinental ballistic missiles (ICBMs) and its overall conventional weapons capability, with Moscow waiting in the wings to supply Iran’s military needs.

The proposed deal is a financial bonanza for the Iranian dictatorship, the world’s biggest state sponsor of international terrorism, and the strongest backer of terror groups dedicated to the destruction of Israel, including Hamas and Hezbollah.

Once the deal moves forward, Iran will gain an immediate $150-billion windfall from the unfreezing of overseas accounts, as well as major additional revenue from the lifting of economic sanctions, including oil sanctions.

The deal places Israel, and U.S. allies in the Gulf States such as Saudi Arabia, in an increasingly perilous position and will inevitably lead to an arms race in the region, with the prospect of a war in the Middle East now even more likely.

Obama’s unconvincing defense of his administration’s highly flawed Iran deal looks increasingly desperate. His aggressive focus on attacking opponents of the deal, both at home and abroad, further demonstrates that he has lost the argument and feels compelled to resort to name-calling and political vitriol.

Whatever the rhetoric coming from the White House, however, the fact remains that the proposed agreement with Tehran is disastrous for U.S. interests and will pave the way for a nuclear-armed Iran.

Critics of the Iran deal are anything but “crazy”—they are standing up for the defense of the free world in the face of a grave threat.