How Should Sexual Assault Be Managed on Campus? Two Bills’ Different Approaches 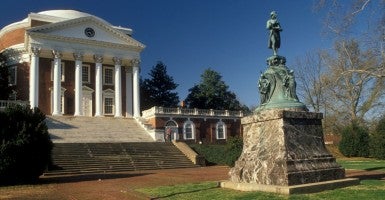 Evan Schrage is a member of the Young Leaders Program at The Heritage Foundation.

There is no doubt that American colleges should be safe for all students.

A recent University of Virginia case is any example, however, of the difficulty college communities often face dealing with those accused of crimes, as well as those who are victims.

These players were pilloried in the media and on campus, even while protesting their innocence.

At Washington and Lee University, another case has landed in court, where the expelled student alleges a host of due process violations on the part of the university.

Yet even while false accusations do occur, criminal acts also occur on college campuses. It is certainly the case that colleges should take such allegations seriously.

This means all members of university communities should be on guard to help keep each other safe.

In effort to combat this, lawmakers last month introduced two similar pieces of legislation in the House, aimed at reforming the way colleges and universities handle claims of sexual violence on their campuses.

Both are similar in composition and attempt to leverage federal funding to mandate various procedures be followed on college campuses whenever an allegation of “sexual violence” is made.

This method of regulation is used because Congress does not have general Constitutional authority to regulate the nation’s education system: however, it can attach strings to federal money, and it often does so.

Thus, one major theme of future legislation in this area will be how to appropriately leverage the federal spending power while also respecting local oversight of schools.

Both pending acts would allow the “standard of proof” to be set by the individual institution.

Currently, colleges receiving federal funds are mandated by the Department of Education to use the “preponderance of evidence” standard in adjudicating allegations of sexual assault, which means a reviewing board need only conclude that it is “more likely than not” that someone was committed a sexual assault in order to “convict” and even expel an accused student.

This low standard of proof has been in place ever since the Department of Education issued a “Dear Colleague” letter back in 2011. However, this centralized approach clashes with the federalism values in the Constitution and has led for many to call for more local management of sexual assault proceedings.

These two bills would explicitly allow each “institution” to set its own standard, rather than following Department of Education mandates.

The two acts do differ in one important way.

Under the Safe Campus Act, institutions would be required to report claims of sexual violence to a local law enforcement agency.

If the alleged victim does not agree to allow the school to report the crime reported to a local law enforcement agency, the institution would not be permitted to conduct its own investigation into the alleged incident.

The Fair Campus Act does not include this provision. Currently, it is an open question whether or not colleges are well-equipped to adjudicate issues of sexual assault, or whether requiring mandatory referral to law enforcement makes more sense.

When Congress returns in the fall, the issue of campus sexual assault will undoubtedly be a part of the discussion, and it is certainly a serious issue worthy of a measured response.

The Heritage Foundation will be hosting a discussion on this important issue — “Due Process Goes to School: How to Handle Campus Sexual Assault Cases” — as part of its “Preserve the Constitution” series featuring three experts on the subject: Heather MacDonald of the Manhattan Institute, KC Johnson of Brooklyn College, and Samantha Harris of the Foundation for Individual Rights in Education. The event will be on October 8 at noon, and is open to the public.