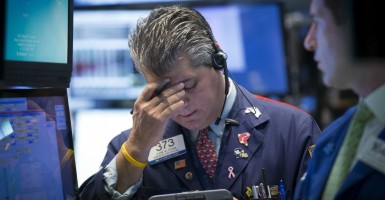 Traders work on the floor of the New York Stock Exchange August 24, 2015. Wall Street opened sharply lower on Monday with the Dow Jones industrial average losing more than a 1,000 points following a more-than 8 percent drop in Chinese shares and a sell-off in oil and other commodities. (Photo: Brendan McDermid/Reuters/Newscom)

The global market fell sharply after China devalued its currency two weeks ago, evoking apprehension from investors that the world’s second-largest economy was not as strong as state estimates reported.

William Wilson, a senior research fellow specializing in Asian studies at The Heritage Foundation, noted the most recent state estimates claimed China was growing at 7 percent, but said many now believe those numbers were “fudged.” He said China is likely growing at 4 percent or 5 percent and slowing.

Stocks also nosedived across Europe and Asia as the main indexes in Germany, France, the United Kingdom, Japan and Hong Kong dropped by 4 percent or more.

Wilson said a global fall-off is occurring because of China’s economic scope. It is the world’s second-largest importer and has accounted for a third of global economic growth for the past five years—more than any other country in the world. China is also the largest trading nation for 75 countries.

He predicted that China will have a harder time mediating the current economic “crisis” than it did in 2009 because of the state’s “enormous” run up in debt, its interest rate cuts, and its continued use of stimulus packages.

“None of it is working and they’re getting desperate,” Wilson said. “I think you’ll see further weakening of the exchange rate because they don’t have anymore policy tools.”

Despite Monday’s stock market numbers, Wilson said those in the U.S. should not panic.

“Economic growth isn’t tied that tightly to the Chinese economy,” he said. “The Chinese economy could actually hit a hard landing and the U.S. economy wouldn’t necessarily go into a recession, we could continue growing,”