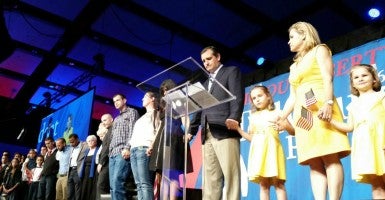 DES MOINES, Iowa—Several Americans who have faced threats to their religious liberty united for a rally last week.

“These threats are not imagined. They’re not made up,” rally organizer Sen. Ted Cruz, R-Texas, said. “These are real people, leading real lives who found themselves facing persecution simply for living out their faith.”

Iowa couple Dick and Betty Odgaard, who are Mennonite, told  how they were forced to close their business, the Gortz Haus – a wedding venue located in an historic church.

The wedding venue also served as an art gallery, flower shop, and restaurant. After declining a gay couple’s request to use their venue for their wedding in 2013, the couple became the target for attacks.

Asked why they didn’t host the same-sex wedding, Betty said, “We could not celebrate a sin.”

The Odgaards were fined $5,000 last year. In July, the couple closed the doors on the business.

“This was my passion. This was our passion,” Betty said. “It’s very difficult to close the doors and walk away. It’s hard to pack up.”

The Odgaards are preparing for an upcoming auction in October.

“We have a lot of supporters,” Dick said. “The interesting part about it is that many of those supporters didn’t want to support us publically.”

All of the panelists shared their stories of heartbreaks, lessons, and encouragement.

“I was never in a court,” said Aaron Klein, who has been fined $135K after not baking a wedding cake for a lesbian couple.

“Before all of this happened, I had a very large lack of trust in my God. I hate to admit that, but I did,” Melissa Klein said. “And through this and through standing for him, I have learned to trust him so much.”

This week the Klein family baked 10 cakes to send to LGBTQ groups to show love for these individuals, even though the Kleins do not support gay marriage.

“I would just encourage you all,” Melissa continued, “stand for God and be strong because he can move in your life like you have never seen him move before.”

Before the couple closed the bakery, Melissa says some people would verbally show their support, even purchasing cakes, yet ask to not put the sticker label for the business on the box.

“I thought, ‘If you’re with me and you’re standing with me, why can’t you stand yourself?’” Melissa said.

The Kleins told the audience that they have also gotten their share of hate mail for their decision.

“We got to stand up for religious freedom in this country,” Aaron continued. “We have to protect it for the next generation.”

Wife of pastor who is serving 8 years in Iranian prison speaks with Senator @tedcruz #ReligousLibertyRally pic.twitter.com/5tthl4DYqc

Pastor Saeed Abedini, one of the four Americans imprisoned in Iran, has been imprisoned since 2012 due to preaching the Gospel.

Naghmeh Abedini, his wife, spoke at the rally, sharing the impact this has had on her family.

“My daughter will be nine next month,” Naghmeh said. “She was five when she last saw [Saeed]. It’s heartbreaking because a few weeks ago I noticed she stopped drawing Saeed in the family when she draws family pictures.”

She feels this is her children’s way to cope with the lost hope that their dad will come home.

Through the turmoil and torture abroad, Naghmeh says Saeed has not backed down on his Christian faith and tells other people about the Gospel while he is in prison.

.@tedcruz: "There is a war on faith in America today" #ReligiousLiberty #Cruz2016 #iacaucus pic.twitter.com/UgLCcFAgFB