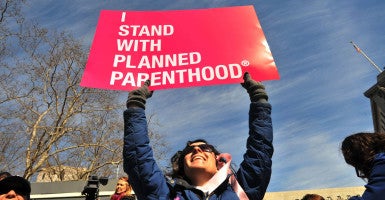 Planned Parenthood is under fire after a series of undercover videos shed light on the organization's abortion practices. (Photo: Nicholas Jason/SIPA/Newscom)

More than two dozen companies, including some household names, are listed as donors to one of Planned Parenthood’s affiliates, according to information obtained by The Daily Signal.

The 2013-14 annual report for Planned Parenthood of Southern New England—an affiliate of the national organization that operates in Connecticut and Rhode Island—lists companies that have contributed to the organization (see below).

The revelation comes weeks after Planned Parenthood removed the names of 41 corporate donors from its website following a Daily Signal investigation. Three of those companies—Coca-Cola, Ford and Xerox—publicly objected to their inclusion on Planned Parenthood’s list.

Planned Parenthood is in the midst of a controversy following the release of several videos by the Center for Medical Progress showing senior executives of the organization discussing the sale of fetal organs at affiliates of the nation’s largest abortion provider. Planned Parenthood has denied any wrongdoing.

Profiting from the sale of fetal organs is a federal felony in the United States.

Planned Parenthood of Southern New England lists the following corporations as having donated to them in fiscal year 2014:

The Daily Signal reached out to each company to ask about the donation. The Tug Hollow Corporation and High End Landscape LLC could not be reached for comment.

A representative for UPS said an “internal review” didn’t show Planned Parenthood as an organization that had received a grant from them.

A spokeswoman for Chace Ruttenberg & Freedman LLP denied that the firm had donated to Planned Parenthood.

According to a representative for Agniel Commodities LLC, “the ownership” of the company holds a “favorable” view of the work of Planned Parenthood.

A spokesman for Goodcopy told The Daily Signal that the company contributes to all the nonprofits that they have as clients and that Planned Parenthood “does a good service” to the community. Asked if he would continue his relationship with Planned Parenthood, he said, “I don’t get involved in politics.”

Working Assets and HMSDesign did not return The Daily Signal’s request for comment, but both highlight their donations to Planned Parenthood on their websites.

A spokesman for General Electric and the GE Foundation said they do not contribute as an organization to Planned Parenthood, but they will match employee gifts, as they do for many 501(c)(3) organizations.

Bristol-Myers Squibb provided a statement to The Daily Signal:

The Bristol-Myers Squibb Employee Giving Program enables full-time employees in the United States and Puerto Rico who make charitable donations to IRS-qualified 501(c)(3) organizations to have their personal charitable donations matched dollar-for-dollar by the Bristol-Myers Squibb Foundation. In addition, employees may donate their service anniversary or retirement gifts to the IRS-qualified charity they choose.

The gift to Planned Parenthood of Southern New England was made through the Bristol-Myers Squibb Employee Giving Program.

A representative for Network for Good said that their organization merely processes gifts from third-party donors and sends them to the organization designated by the donor.

The Daily Signal previously reported that a representative for AT&T said, “Our company matches employee contributions to various 501(c)(3) organizations. Under this program, some of our employees selected Planned Parenthood for these contributions. That matching option is no longer available.”

When asked for further comment on the donation to the Southern New England affiliate, the representative declined.