Did This State’s Powerful House Speaker Overreach on Firefighter Overtime? 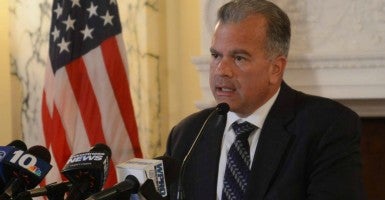 'Everything I’ve ever done has been to serve the public’s interest,' Rhode Island's Nick Mattiello says. (Photo: Nicholas Mattiello Facebook)

The union representing some of those firefighters pays him rent, they note.

Leaders of firefighters unions had sought to bring out a big gun after the Rhode Island Supreme Court ruled in favor of towns and other municipalities that wanted to limit overtime costs for firefighters.

So they called on Rep. Nicholas “Nick” Mattiello, D-Cranston, speaker of the Rhode Island House of Representatives.

Mattiello has a reputation as being friendly to union causes.

Critics also note that he and his brother lease office space to Cranston Firefighters Local 1633 in a building they co-own. The local union is affiliated with the International Association of Firefighters.

Mattiello, first elected to the House in 2007, has declined to reveal how much he makes in rent from Local 1633.

But the speaker has said the arrangement causes no conflict of interest and that he separates his business relationship with Local 1633 from his legislative duties.

“We are a part-time legislature and many of us are active in the business world,” Mattiello told the news site GoProvLocal. “I am not going to give up a tenant because I was elected to the General Assembly.”

But on the subject of overtime, he certainly sought to do the bidding of firefighters unions—at the expense, detractors say, of the taxpayers he is sworn to serve. The case involves how firefighters are scheduled to work. Most states use the “three-platoon system,” in which firefighters work a 24-hour shift, then take 48 hours off.

This means a third more firefighters and higher expenses for salaries, benefits, and related costs.

In 2012, the town of North Kingston attempted to go to the three-platoon system, in line with public sentiment, but union leaders sued to block the move. North Kingston prevailed, however, when the state Supreme Court overturned a lower court ruling in June.

In Rhode Island, the office of governor is largely a ceremonial position. The power lies with leaders in the General Assembly’s House and Senate.

And Mattiello set about using his power after the high court’s decision, introducing one bill to allow higher overtime costs by gutting the North Kingston ruling and another measure mandating retention of the more expensive four-platoon system.

Neither bill attracted much support, and the speaker pulled them in June before they could come up for a vote.

These were no ordinary pieces of legislation, either, says Ken Block, a software engineer, business leader, and activist in Barrington, R.I.

This could not have happened without the speaker, and he is 100 percent conflicted since he rents office space to the firefighters union in Cranston. These were horrible bills and the fact the House speaker and unions lost this one says that people are paying attention.

Rhode Island residents called and wrote to lawmakers, showed up for meetings, and sent letters to newspapers and other media outlets.

The Daily Signal sought comment from Mattiello and from union leaders, but they did not respond.

Mattiello, however, told talk radio station WPRO that his stand in favor of pension reform did not endear him to unions. He said:

Everything I’ve ever done has been to serve the public’s interest. I’m not going to give up a private tenant in a difficult economy to serve someone’s personal mean spirited agenda.

Paul Valletta, head of the Cranston local as well as lobbyist at the statehouse for the Rhode Island Association of Firefighters, told GoLocalProv he agreed with Mattiello that lawmakers hadn’t especially done the bidding of fire departments since he was elected speaker in March 2014.

Does Mattiello’s retreat mean things have changed in Rhode Island, where unions traditionally have political clout, and taxpayers’ interests will begin to prevail?

It’s too early for taxpayers to celebrate, Block says.

“These overtime bills were ridiculous,” he says, arguing that the measures conflicted with federal law by requiring overtime pay for firefighters after 42 hours rather than after 53 hours. The original statehouse is a reminder that Rhode Island was the first American colony to break from Great Britain. (Photo: Kevin Mooney/The Daily Signal)

On the other hand, the nation’s smallest state has an independent streak. It was not only the first to declare independence from the British crown, but the last to sign on to the U.S. Constitution because it demanded that a Bill of Rights first be attached.

“Yes, that’s a proud history,” says Fred Gralinsky, who is president of the Central Coventry Fire District board and opposed the union on the legislation. “But remember, we also have a history of organized crime in this state, and I’m worried that this is something that still infects the culture.”

Block agrees, and says he is encouraged by what he considers the defeat of Mattiello’s bills.

“I’d like to think that the people are beginning to rise up and challenge abusive practices,” Block says. “There was such outrage over these overtime bills, and for once the elected officials stepped back and listened to the people. I’d like to keep that momentum going.”