What the Left Misunderstands About Cuba’s History 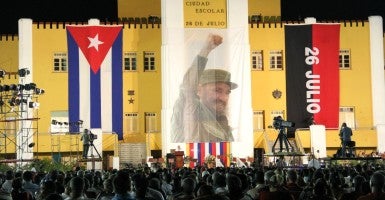 Just before Secretary of State John Kerry raised the Stars and Stripes in Havana last week as he opened the U.S. Embassy in Havana, Sen. Patrick Leahy, D-Vt., accused those who oppose President Obama’s Cuba policy of being nostalgic for former dictator Fulgencio Batista.

It’s probably best to clear up some misconceptions he may have left.

Speaking in Congress, Leahy said that “positive change in Cuba will take time. But it will come not as a result of stubborn nostalgia by a vociferous few for the Batista years, but by visiting Cuba, listening to the Cuban people, and engaging with them.”

By all means, let’s listen to the Cuban people.

Certainly, that would include some of the many dissidents—people like Antonio Rodiles, whom the regime’s henchmen beat to a pulp last month for demanding in public that Cuba be free.

Antonio says that Obama’s decision to establish diplomatic relations with the Castro regime has only emboldened it. “They now feel they can act with impunity,” he told me when I last spoke to him. That was before the beating, which proves his assessment was right.

Antonio doesn’t need to visit Cuba.  He lives there. He’s not nostalgic for Batista. He simply yearns for democracy and basic human rights.

And let’s listen to Rosa Maria Paya. Her father, the dissident Oswaldo Paya, was the 2002 winner of the European Parliament’s Sakharov Prize. In 2012, he died in a very mysterious car crash. A Spanish lawyer who survived that crash, Angel Carromero, accuses the Castro regime of killing Paya.

Just last month the Human Rights Foundation published a report that cited evidence Paya was assassinated by the Castro regime. It called for an investigation, which the regime refuses to carry out.

Rosa Maria Paya, too, demands an investigation—and a plebiscite so Cubans can vote for change or more of the same. She recently described how Obama’s policy had changed life in Cuba by quoting Vaclav Havel: “The only thing we have left is the power of the powerless.”

No, she isn’t pining for the Batista years, either. But she deeply regrets the further empowerment of a murderous regime.

How about those of us in this country who oppose the new policy? Does Leahy really believe that Texas Pastor Rafael Cruz—who was tortured by Batista—looks back fondly upon the dictator? Does he think that Cruz’s son—who sits with Leahy in the Senate—is a shill for Batista?

I grew up in a Cuban household in the 1960s. There was no love lost for Batista in my family. At the dinner table, I was taught that batistiano—the term for those who followed Batista—was second only to comunista as an insult.

Batista, you see, had my father arrested while he was still in law school. And my father’s father devoted a good part of his life to fighting Batista at every step—when the strongman ruled behind the scenes in the late 1930s, when he was freely elected in 1940 and when he took over in a coup in 1952.

As evidence, I offer one of my grandfather’s columns from the late ‘30s. You don’t have to read Spanish, just look at the cartoon. It shows Federico Laredo Bru, Batista’s puppet president from 1936 to 1940, dreaming that he’s holding Batista in the palm of his hand, only to be awakened in the last frame. My parents made the mistake of supporting Castro when he was in the mountains. It wasn’t until six months after the triumph of the revolution that they realized, to their horror, that he was a communist.

Before they had not believed Castro was a communist precisely because Batista said that he was.

By all means, let’s listen to the Cuban people. But be sure to listen to those who oppose the regime and not just those who shill for it. The Associated Press reports that more than 20 U.S. lawmakers have visited Cuba since Obama and the Castros declared détente—and not one of them has met with a dissident group.

Meanwhile, if it’s not too much to ask, Leahy should refrain from accusing Rodiles, the Paya family, Pastor Cruz or any of the millions of Cubans and Americans who disagree with the president’s Cuba policy of being closet batistianos.

There’s no need to add insult to this injurious policy.