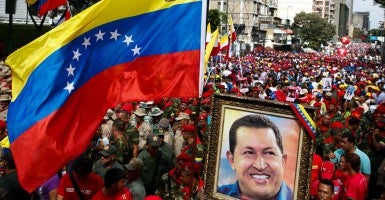 Remember those funny commercials where the opera stars sing, “I have a structured settlement and I need cash now!”? Nicolás Maduro knows what they mean.

Hugo Chávez set up PetroCaribe a decade ago when he was flush with cash and eager to buy friends and influence for his oil-rich country and the “Chavista” brand of authoritarian populism he sought to export to the region.

PetroCaribe gave 18 Caribbean nations access to subsidized petroleum loans. Venezuela promised to finance up to 50 percent of the cost of the oil over a 25-year period.

Now PetroCaribe is all but dead, with Venezuela on the verge of bankruptcy. Hard-pressed by low oil prices and the consequences of Chávez’s long, corrupt, and disastrous mismanagement of Venezuela’s economy, his successor is working with Wall Street to offer incentives to those PetroCaribe beneficiaries to repay their debts now—decades before they are legally due. Why?

Because the current Venezuelan president, Nicolás Maduro, needs cash now. According to the 2015 CIA World Factbook:

Venezuela remains highly dependent on oil revenues, which account for roughly 96 percent of export earnings, about 40 percent of government revenues, and 11 percent of GDP. The country ended 2014 with an estimated 4 percent contraction in its GDP, 68.4 percent inflation, widespread shortages of consumer goods, and declining central bank international reserves. The International Monetary Fund forecasts that the GDP will shrink another 7 percent in 2015 and inflation may reach 80 percent.

So, guided by Goldman Sachs and other Wall Street firms, Maduro first looked north—to the Dominican Republic. Its president, Danilo Medina, was able to strike a good deal for his citizens by paying off $4 billion owed by the Dominican Republic to Venezuela for years of oil shipments at a discount (or “haircut”) of more than 50 percent.

That “haircut” was taken by the people of Venezuela, of course, not by Maduro and the Chavistas.

Then, last month, another big PetroCaribe beneficiary in the neighborhood, Jamaica, issued roughly $2 billion in bonds on the international capital market and will use $1.5 billion to retire $3 billion in long-term PetroCaribe debt. Another haircut for Venezuelans.

Finally, let’s not forget that long-time beneficiary of Venezuelan largesse: Daniel Ortega. The hard-left Sandinista, who has by now accumulated more power and wealth in Nicaragua than Anastasio Somoza—the corrupt right-wing dictator he overthrew back in the 1980s—owes his grip on power in part to the PetroCaribe-funded social benefit schemes he parceled out to his constituents.

Not to mention the back-channel PetroCaribe funds diverted to his re-election campaigns. As former Bush administration ambassador to the Organization of American States Roger Noriega has reported, some analysts contend that Ortega’s goal is the same as the goal of his hero. Hugo Chávez: to die in office—only not as young!

Naturally, when Nicolás Maduro and the other Chavistas in Caracas were hard up for cash, Ortega was there for them. Electricity generation costs plunged last year in Nicaragua along with global oil prices.

Yet, as the Christian Science Monitor reported, “Instead of passing on savings to consumers, for the past nine months the Nicaraguan government has been paying down its [PetroCaribe] debt, which economists estimate at $200 million.”

The biggest losers in all this, though, are the Venezuelan people.

Hugo Chávez used PetroCaribe to burnish his reputation and buy influence, but his policies have virtually destroyed the Venezuelan economy.

Now, the Venezuelan people are getting just pennies back on the petro-dollars their former dictator invested in his grand scheme to dominate the region.