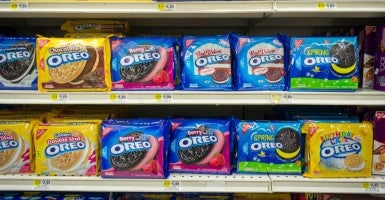 The manufacturer of Oreo cookies recently announced plans to move production of Oreos from Chicago to Mexico, resulting in a loss of 600 U.S. jobs.

This should be a wake-up call to defenders of the U.S. sugar program and other job-destroying trade barriers.

The leading ingredient in Oreos is sugar, and U.S. trade barriers currently require Americans to pay twice the average world prices for sugar.

Sugar-using industries now have a big incentive to relocate from the United States to countries where access to their primary ingredient is not restricted.

If the government wants people making Oreo cookies and similar products to keep their jobs, a logical starting point would be to eliminate the U.S. sugar program, including barriers to imported sugar.

This obvious connection between the lost jobs and sugar quotas was missed by many observers. According to one online commenter: “This is why tariff[s] on products coming to U.S must be raised.”

The loss of Oreo cookie jobs should reinforce a lesson on the job-destroying aspect of protectionist trade policies.

According to a 2006 report from the government’s International Trade Administration: “Chicago, one of the largest U.S. cities for confectionery manufacturing, has lost nearly one-third of its SCP manufacturing jobs over the last 13 years. These losses are attributed, in part, to high U.S. sugar prices.”

That lesson appears to be lost on unions that are supposed to represent the workers losing their jobs in Chicago.

For example, The Bakery, Confectionery, Tobacco Workers and Grain Millers Union consistently has opposed free trade agreements with sugar-producing countries like Australia, Brazil, and Mexico—the kind of trade deals that just might protect their members’ jobs.