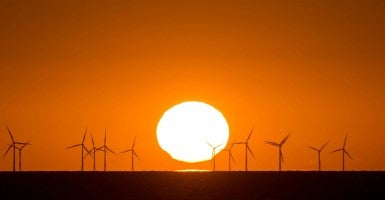 "Wind isn’t even a great energy choice (when the wind stops, so does the electricity)." (Photo: Daniel Reinhardt/dpa/picture-alliance/Newscom)

The Department of Energy released its annual Wind Technologies Market Report last week, and the headline is roughly the same as years past: wind is great…and getting greater, but it needs more federal subsidies.

In fact, the Department of Energy and the wind industry have all but acknowledged the long-term un-competitiveness of wind.

The DOE’s report announced that the U.S. is second in the world for total wind capacity at 66 gigawatts, with 4,800 megawatts installed in 2014. Efficiency (“capacity factor”) increased from 30 percent in 2000 to 33 percent in 2014. On top of reduced costs, the DOE notes that 2014 saw the lowest prices for wind energy in the US ever.

Yet for all this improvement and apparent success, Department of Energy Secretary Ernest Moniz concluded from the report that “through continued investments and the help of stable policies, we’re confident that wind power will keep playing a major role in creating jobs and shaping America’s clean energy future.”

The CEO of the American Wind Energy Association pitched in, saying that “policy stability will keep this American economic success story going.”

Apparently both have no confidence in wind electricity without the crutch of federal subsidies.

It turns out that wind isn’t even a great energy choice (when the wind stops, so does the electricity). Imagine trying to power a hospital or run a factory on an electricity source that can change from minute to minute. Integrating wind, as an intermittent electricity source, also strains the grid as other reliable suppliers like natural gas, coal, and nuclear ramp up and down to pick up wind’s slack.

Nevertheless, wind energy has been directly subsidized by the federal government for over 20 years. The biggest handout has been the wind production tax credit (PTC). It has been extended, re-extended, and retroactively extended since 1992 and until recently gave wind electricity providers a tax cut of 2.23 cents for every kilowatt-hour generated.

Congress let the PTC expire in 2014, a decision the Department of Energy pejoratively casts in its report as “a possible policy cliff awaits” in 2016 when the impact of the expired PTC hits.

Only projects that began construction by the end of 2014 were eligible for the tax credit. These will all likely be online by 2016, meaning any new construction will be without the federal subsidy.

The wind industry has baked the PTC into its cost of business calculus and has come to assume that the fair rules must include subsidies. Unsurprisingly, the wind industry views anything to put wind companies back on the tax role as “moving the goalposts.” In some sense, you can’t blame them—it makes for a great business model when wind electricity providers can pay people to take wind electricity and still make money, thanks to federal subsidies.

After more than 20 years of the PTC and related investment tax credit, it takes particular gall to say more is needed to get the wind industry off its feet.

In addition to these federal handouts, the wind industry also enjoys favoritism in energy markets thanks to state-level renewable energy goals and mandates even without the federal PTC.

And to top it all off, the EPA’s carbon dioxide reduction regulations finalized earlier this month would tilt energy markets even farther in wind’s favor if these damaging regulations withstand the courts and opposition by States and Congress.

The rule gives states credit for bringing more “renewable” electricity sources online (ironically the EPA isn’t consistent in what it means by “renewable”) and has set a goal of 28 percent of U.S. electricity to come from renewables by 2030. For some perspective on just how massive a subsidy this is for wind power and other sources like solar and biomass, in 2014 renewables provided only 7 percent of U.S. electricity; 4.4 percent was from wind.

While increasing our wind capacity will do nothing to impact global temperatures—a fact the EPA itself admits—it will have an impact on our environment. A very efficient wind farm would need 260 times the amount of land to produce the same amount of electricity as a typical nuclear power plant.

Certainly American families, businesses, and communities should invest in electricity sources that make sense for their individual circumstances. But we shouldn’t pretend that wind energy is free.

Without skipping a beat, supporters of the wind PTC say that despite all this “policy stability” is vital and the tax credit should be extended for the long term or permanently. Stability also comes from cutting the cord for good, however. With the wind PTC having been expired since December 2014, it’s time the wind industry got used to the new normal.