Should Military Chaplains Be Forced to Conduct Same-Sex Weddings? 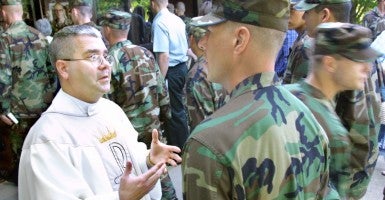 Greg Davis is a graduate from The Heritage Foundation’s Young Leaders Program.

Amidst the celebrations there was also concern: there seems to be a growing threat to religious liberty for military chaplains.

What happens to chaplains from religious communities that view marriage as a union between one man and one woman?

With the mayor of Houston subpoenaing local pastors’ (who are not government employees) sermons to see if they contain any “homophobic” messages, it is not far-fetched to think that the government will do the same for its own employed chaplains.

It has in fact already occurred – a military chaplain was removed from duty after sharing teachings of his religious belief.

Throughout the history of the Army Chaplain Corps, chaplains have served by providing soldiers and their families a place to worship and receive the spiritual care and support that aligns with their own religious convictions.

It is important to have chaplains in our military because they ensure that every soldier has available to them everything necessary to exercise their religious liberty according to the dictates of their own conscience.

Without chaplains, soldiers would not have proper access to the spiritual care they desire.

Col. Ron Crews, a retired United States Army chaplain and now the Executive Director for Chaplain Alliance for Religious Liberty, was recently interviewed on the subject of the role of chaplains in the military.

Crews spoke about the important duties the chaplain performs, as well as threats to religious liberty for chaplains and soldiers. “Chaplains are there to make sure every service member can exercise their religious liberty while they wear the uniform” says Crews.

That is not all that chaplains do, as Crews points out. Chaplains also play an important role in cultivating a strong marriage culture in the military.

“Most importantly (for the chaplain),” says Crews, “is to be there for the military person or family member. To make sure that person can worship God according to the dictates of their conscience.” That is by the constitution why we are there.”

Crews expressed great concern over the potential effects from the Supreme Court ruling on gay marriage, and also how the Secretary of Defense is pushing for transgender persons in the military.

How will this affect how chaplains perform religious ceremonies and conduct marital counseling and lead marriage retreats? Will chaplains who believe marriage is defined as a union between one man and one woman be told they cannot express their beliefs while exercising their religious duties?

Will what they say in their sermons be controlled? Crews mentioned that a few chaplains have already been reprimanded for what they have said during religious services.

It is important that the government respects each person’s right to worship and express their religion according to the dictates of their own conscience. The government must see that all people are free to do so, including military chaplains.

The American soldier swears allegiance to uphold and defend the Constitution of the United States.

But if the constitutional rights of our military men and women are not protected, how can we expect them to risk their lives to protect ours?

This story was updated to remove the author’s personal narrative as a chaplain.