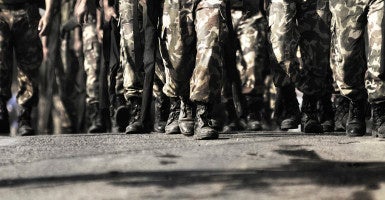 Let’s cut to the chase: Does the Iran deal make war more or less likely?

“No deal means a greater chance of more war in the Middle East,” President Obama says. His critics disagree. They think it will make war more likely. So which is it?

Let’s break it down.

First, the Iran agreement does not stop Iran from getting a nuclear weapon. It may slow it down, but in 15 years Tehran is free to do what it wants. For the region, the signal couldn’t be clearer. Iran is going nuclear, if not soon, then at least in 15 years.

Saudi Arabia and Turkey are not going to sit on their hands waiting to see what happens. They will prepare not only for the worst but also the inevitable: a nuclear Iran. It will be only a matter of time before they start developing nuclear capabilities of their own, which will greatly enhance tensions in the region.

The result: More nuclear proliferation and a greater likelihood of war.

Second, the president doesn’t like to say it, but war as a post-deal option has not been taken off the table. Gen. Martin E. Dempsey, chairman of the Joint Chiefs of Staff, has said as much. When asked whether the deal is better than a military strike, Gen. Dempsey said it is, but he added: “I will sustain the military options in case that becomes necessary.”

Everyone knows the $150-billion windfall to Iran once the sanctions are lifted will be used to foment more terrorism and war. No responsible U.S. military leader would ever take the military option off the table under these circumstances.

We actually do have fewer good options because of the deal, but that is only because Mr. Obama made it so. He allowed Russia and other countries to weaken the agreement. He failed to appreciate that their security and venal financial interests made them more willing to tolerate a nuclear Iran than we should be.

So when Secretary of State John F. Kerry says there is no good alternative to the deal, he is describing a predicament of his own making. He apparently wants the alternative to be as bad as possible in order to gain congressional approval.

But all he has really done is make it exceedingly difficult to keep sanctions on Iran, all the while unleashing a geopolitical nightmare on the Middle East. Not only is Iran practically guaranteed a nuclear weapon, it will be financially stronger as the new potential hegemon in the region.

The real choice is not between a weak deal and war, which is what Mr. Obama pretends. It is between a nuclear Iran and increased risks of war on one hand and keeping the existing sanctions in place, which reduces the risk of war, on the other.

Maintaining a strong multilateral sanctions regime runs a far better chance of forcing change on Iran than lifting them. A top French official, Jacques Audibert, has told U.S. lawmakers that a congressional rejection of the deal would strengthen our negotiating position. He’s right.

Yes, Tehran continues to develop centrifuges, but strong efforts were being made to block it at every critical juncture in the development phase of nuclear weapons. Not only that, but it was facing tremendous internal pressures because of the sanctions, which is why the mullahs wanted them lifted.

Now that pressure will be gone. The regime will be free to repress its people at will and use billions of dollars in sanctions-relief cash to spread mayhem across the Middle East. Worse than that, it can bide its time and break out of the agreement earlier if it wants. Or it can simply wait 15 years, long after Mr. Obama and Mr. Kerry are gone.

The choice between a bad deal and war is a false one. First, it presumes that the deal will stop Iran from getting a nuclear weapon. It will not. Second, it ignores the increased risk of war caused by the deal. And third, it disregards the importance of strategic patience in dealing with Iran.

Iran may indeed change someday. But it will do so only when its people believe they have no other choice. That choice has been removed by this agreement.