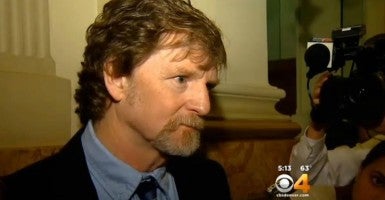 Jack Phillips says he has lost 40 percent of his business since he stopped making all wedding cakes rather than design them for same-sex weddings. (Photo: CBS4, KCNC-TV Denver)

Family and friends of a Christian cake designer hope to help him with a fundraising campaign after a Colorado court ruled Thursday that he must create cakes for same-sex weddings despite his religious beliefs.

“Cake artist” Jack Phillips has said his bakery, Masterpiece Cakeshop, has lost more than a third of its receipts since he stopped making all wedding cakes while the case makes its way through the legal system.

Sander said the “crowdfunding” campaign, through the website Continue to Give, a Christian-oriented service, went online Thursday afternoon—hours after the Colorado Court of Appeals decided Phillips and his business must provide cakes for gay marriages.

The mission: Financially support Phillips, 59, and “protect his freedom of speech and freedom of religion.” The goal: Raise $200,000.

Those who go to the “Support Jack Phillips” site may contribute any amount, making their names and size of donation public or keeping either private. Givers also may leave encouraging messages for Phillips.

The first contributions began to trickle in Thursday night. As of 4 p.m. Sunday, the site had logged 17 donations. Jack Phillips and one of his lawyers, Nicole Martin, in a December 2013 appearance on “Fox & Friends.” (Photo: Fox News Channel)

One of the first contributions, for $100, came with the message: “We appreciate you fighting this battle for the free speech of everyone.”

Another contributor wrote: “You are fighting the good fight and I hope you take it all the way to the Supremes. Free exercise of religion must be protected. You cannot take a right from one to give to another and call that justice.”

Jennifer and Keith Lorensen left this message: “We have been following your case for some time and want you to know you are in our thoughts and prayers.”

They also quoted Joshua 1:9, an Old Testament passage: Be strong and courageous. Do not be frightened, and do not be dismayed, for the Lord your God is with you wherever you go.

Phillips has maintained that his Christian beliefs would be violated if he were compelled to use his artistic talents to express the message that marriage is something other than the union of a man and a woman.

Sander, 63, emailed The Daily Signal after reading its report on the appeals court decision, saying a “Support Jack Phillips” page was up and running.

Sander, a professor of accounting in Indianapolis, said he has known his brother-in-law for more than 40 years. He said he and other family members set up and composed the text for the campaign. Most involved were his wife Linda, an adult son, and Phillips’s other sister, Trish.

A summary describes ongoing threats and harassment that Phillips and his small staff endured beginning 20 minutes after the “less than 30 seconds” in July 2012 during which he declined to create a wedding cake for the two gay men who later sued him.  He also offered to sell them brownies, cookies or other confections.

Soon his shop was inundated by phone calls and emails saying “vile, hateful things about Jack—and about Jesus.” The summary adds:

These attacks are intended to drive Jack out of business. To avoid further harassment and lawsuits and because of the ruling, he has chosen to follow a law that takes away his freedom of speech and freedom of religion, and he has stopped making wedding cakes while his case goes through the courts.

The summary notes statements, some by public officials such as state Human Rights Commissioner Diann Rice, comparing Phillips to a slave owner or to German Nazis who carried out the Holocaust:

During WWII, Jack’s dad, Wayne Phillips, actually fought the Nazis all the way through France and Germany including the D-Day landing and the Battle of the Bulge. He was wounded by the Nazis and received a Purple Heart. He assisted in the liberation of Buchenwald, a concentration camp.

Sander, who says he and his wife also are Christians, describes his brother-in-law as open and giving.

“He’s always straightforward,” Sander said. “There’s never any games with him. He’s easygoing. He’d give you the shirt off his back to be helpful. I’d say he’s pretty generous.”

Unfortunately, from the government’s point of view, he tries to live out his Christian life outside the one or two hours he’s within the chapel walls. … [His faith] guides everything he does.

After losing the first legal round with Colorado’s civil rights agency in 2013, Phillips decided to stop making all wedding cakes rather than be compelled to create them for same-sex weddings.

“He said OK, if that’s the rule, then I won’t make any wedding cakes at all,” Sander recalled.

A three-judge panel of the appeals court Thursday upheld previous rulings that Phillips broke state law against discrimination based on sexual orientation. That essentially was the argument made by the gay couple’s lawyers from the American Civil Liberties Union.

Phillips argued that compelling him to create a cake celebrating same-sex marriage violated not only his First Amendment right to freedom of religion but also to free speech or expression. The court rejected that argument.

By continuing to fight, Phillips hopes to avoid orders to “re-educate” employees—including his grown daughter—and report regularly to the state. Sander was among family members who helped Phillips and his wife, Debi, open Masterpiece Cakeshop after cleaning and installing used furnishings, equipment and appliances in space at a suburban Denver strip mall in September 1993.

“If a straight couple came in and wanted a cake for a same-sex marriage, he would not sell it,” Sander said, adding:

He would not sell that cake to anybody. Who orders the cake is immaterial. … I don’t think it’s an issue of who he’s denying service to, it’s a matter of his not wanting to use his artistic ability in a way that violates his conscience.

The family heard about Continue to Give when, as The Daily Signal has reported, the crowdfunding site helped a Christian couple in Oregon stay afloat financially. Aaron and Melissa Klein face a state fine of $135,000 after their bakery, Sweet Cakes by Melissa, declined to make a wedding cake for a lesbian couple.

Continue to Give describes itself as a “faith-based online tithing and giving platform founded on biblical principles and designed for churches, missionaries, nonprofits, individuals and adopting parents.”