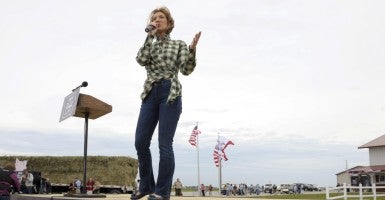 “The regulations that the EPA is rolling out now will destroy livelihoods. They will increase the cost of energy,” she said. “They will destroy industries.”

Inside an agricultural equipment shop, Fiorina spoke to a crowd of around 250 people on the future of rural America.

She says as the EPA controls more of the water in the United States, agriculture is being destroyed. By the end of August the EPA will control 95% of the water in Iowa, she said.

Fiorina believes the EPA is standing in the way of affordable and reliable electricity.

“The EPA thinks that a fish is more important than tens of thousands of jobs.”

Through innovation, technology, and using resources already present, she feels the United States can become the “global energy powerhouse of the 21st century.”

To combat any “festering” problems, she said the economy will grow if regulations and power are lifted from the government.

To help get the economy of the country on track, Fiorina reiterated two ways to get debt and deficit under control: grow the economy and cut spending.

“Two sides of the same coin if they’re done properly.”

Fiorina feels economy growth is being prevented by government spending. She is in favor of a zero-based budget, a “revenue-reducing tax reform,” and would like tax codes simplified.

“We have to cut government size so it becomes competent again,” @CarlyFiorina #iacaucus #Carly2016 pic.twitter.com/HJQrXkFvGH

Other issues discussed at the town hall include religious liberty and protecting life.

Pro-life Fiorina was asked by a local mother of five children about her stance on vaccinating kids.

“When in doubt, it is always the parent’s choice,” Fiorina said.

As for Planned Parenthood, Fiorina would like to see the organization defunded.

“It [the releasing of videos by the Center for Medical Progress] is an opportunity to have a different conversation in this nation about the sanctity of life.”

Not only protecting life at conception, Fiorina said she will stand up for those that “serve and protect” citizens; whether that be those in a battlefield abroad or through law enforcement officials at home.

On criminal justice, Fiorina said she favors reform “because the rules the police are asked to enforce have become a problem.”

“We have the highest incarceration rates in the world. About two-thirds of the people who are in jail today are there for nonviolent offenses. Most of them are drug related offenses.”

Fiorina said she lost a daughter “to the demons of addiction.”

“I understand how addiction impacts so many families, but we can’t have a system where we are incarcerating so many people and not helping anybody. That costs money too.”