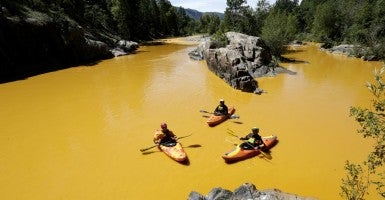 Companies should be held responsible for damage they cause to the environment.

But what if it’s the government that has caused the damage?

Recently the Environmental Protection Agency was responsible for a massive chemical spill into the Animas River in Colorado (an estimated 3 million gallons of wastewater were spilled).

Health impacts are uncertain from the spill, as levels of lead, arsenic, and other dangerous metals are reportedly hundreds of times higher than accepted levels by Colorado and New Mexico government standards. Some reports state the chemical levels could even be as much as 12,000 times higher than normal.

Irrigation channels from the Animas to farms have been closed, causing concerns as far away as California about water availability for crops.

In addition to the serious health concerns raised by the spill, businesses depending on the river have been put on hold. Drew Beezley of 4 Corners Whitewater said he’s canceled 20 rafting trips and fears he will be out $10,000 in lost business.

“Imagine what would happen if a private company caused this waste spill,” remarked New Mexico Gov. Susana Martinez, who found out about the spill only a day after it occurred.

The EPA’s response has been less than satisfactory. Though the EPA has claimed clear responsibility and remorse for the spill, it has been notably slow in informing the public, heightening frustrations.

For example, despite being in the plume’s direct pathway, the New Mexico government wasn’t notified by the EPA until a full day after the EPA knew of the spill. Further, it has yet to explain—nine days after the fact—exactly how and why the massive spill happened.

The White House has been altogether silent on the massive spill, a silence others have picked up on, considering Obama’s vociferous response to the Deepwater Horizon blowout and subsequent oil spill in 2010.

Obama said at the time that he was talking with people to “know whose [rear] to kick,” and Secretary of Interior Ken Salazar described the government’s job as to “basically keep the boot on the neck of British Petroleum.”

Obama then took action not only deal with the spill, but to halt all oil and gas activities on the Gulf Coast, a decision that had enormous economic consequences for large and small businesses along the Gulf.

EPA Doesn’t Face Same Consequences as the Business Would

Companies found in violation of the Clean Water Act pay for mitigation and repairs, as well as millions in fines to the EPA and states.

Companies should certainly be responsible for the environmental damage they cause, but the difference is that when any other business causes an accident, they pay for it.

While many are quick to use accidents like the BP oil spill to condemn capitalism and profits, the EPA’s spill at Gold King Mine in Colorado should illustrate the problems of socializing the cost of accidents.

In the case of the Gold King Mine, the EPA and Congress will have to pay for mitigation, repairs, and settlements—which is another way of saying every U.S. taxpayer will pay for it.

Likely responding to criticisms of a double standard by the government in how it treats private companies in the case of environmental disasters, EPA Administrator Gina McCarthy said “We will hold ourselves to a higher standard than anyone else.”

That’s a good start, but oversight and investigation into what happened and why more importantly needs to come from outside the EPA.

The EPA must be held responsible for its actions, carrying the full responsibility by paying for costs and damages out of its own budget. Decisions about how to move forward should ultimately be given to the states impacted.

The states, of course, have to live with the consequences and, as with all good environmental policy, should be able to determine the “what to do, how to do it, and when to do it” that best meets the unique concerns and interests of local populations.