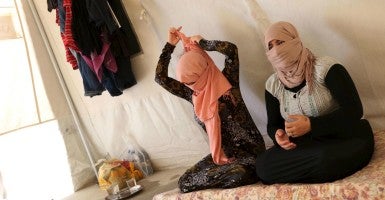 Yazidi sisters, who escaped from captivity by Islamic State (IS) militants, sit in a tent at Sharya refugee camp on the outskirts of Duhok province July 3, 2015. The sisters were among one hundred women, men and children taken by IS as prisoners after the militants attacked their village of Tal Ezayr in the northern Iraqi province of Mosul close to Syrian border last year. (Photo: STRINGER/IRAQ/REUTERS/Newscom)

Thousands of women and girls have been brutally raped, beaten, and sold as slaves by the Islamic State of Iraq and Syria (ISIS).

Many of these are girls are Yazidis – from a small religious minority that practices the ancient religion Yazidism.

In August 2014, the Yazidis were driven onto Mount Sinjar, and overtaken by ISIS.

Many of the men and older boys were shot, while women were systematically collectivized and transported to surrounding areas and later sold as sex slaves.

Because these girls don’t practice Islam, rape is justified and encouraged by ISIS’ extremist version of Islam. ISIS cites certain portions of the hadith to defend its use and sale of sex slaves.

As women who have escaped begin to tell their horrifying stories, ISIS is being revealed for the unbelievably brutal terrorist group that it is.

Those who have escaped are able to recount the transport of women and subsequent sales– suggesting that the trade was well planned and premeditated.

ISIS’ abduction and sale of women as sex slaves is nothing less than human trafficking.

Since ISIS has proven it will go to extensive lengths to raise revenues, it’s no surprise that they would chose human trafficking as one of their modes for reaping profit – worldwide profits from human trafficking may be as high as $150 billion annually.

Firsthand accounts report that girls, as young as six years old, were raped multiple times by different men, forced to marry members of ISIS, and mandated to convert to Islam (some at gunpoint). The girls were beaten, or even murdered, for disobedience.

“From 9:30 in the morning, men would come to buy girls to rape them. I saw in front of my eyes ISIS soldiers pulling hair, beating girls, and slamming the heads of anyone who resisted. They were like animals…Once they took the girls out, they would rape them and bring them back to exchange for new girls. The girls’ ages ranged from 8 to 30 years…”

Accounts like Dilara’s directly contradict ISIS propaganda, which utilizes the promise of homes, husbands, and a better life to lure women into captivity. Incredibly, at least 550 western women alone have willingly joined ISIS. Yazidi women are now able to counter ISIS propaganda by recounting their own horrific stories of abuse in an attempt to deter women from joining the terrorist organization.

The United Nations now claims that ISIS may be guilty of war crimes, genocide, or crimes against humanity.

The tactics employed by ISIS, including sexual violence and rape, recruitment of child soldiers, and practice of slavery used against ethnic and religious minorities form the basis of the U.N. contention.

Charles Stimson, of the The Heritage Foundation has argued that,

“ISIS poses a “direct and significant threat to us” and must be defeated using all necessary means. The American people support military action against ISIS, and the Administration accordingly must develop a comprehensive, overarching strategy to confront and ultimately defeat this enemy. Working with our partners and allies and the countries in the region that are most affected by ISIS, the United States must do what it traditionally has done: lead.”