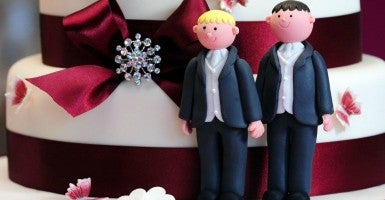 Jack Phillips must design cakes like this one, for a same-sex wedding in London , a Colorado court rules. (Photo: Rui Vieira/Zuma Press/Newscom)

“Cake artist” Jack Phillips said he gladly serves gays and lesbians in his family business. But, Phillips said, he could not in good conscience design a wedding cake for a same-sex couple when, as a Christian, he believes that marriage is the union of a man and a woman.

A three-judge panel of the Colorado Court of Appeals ruled that not doing so amounts to illegal discrimination based on sexual orientation, the Associated Press reported.

“Today is a proud day for equality and for upholding the law,” Ria Mar, a lawyer for the state chapter of the American Civil Liberties Union, said of the ruling in an ACLU release. “In America, no one should be turned away from a shop or restaurant because of who they are or who they love.”

Phillips now faces fines if he will not make wedding cakes for same-sex couples.

The baker’s lawyer, Jeremy Tedesco, told The Daily Signal that the three judges “got it wrong on all counts” in a unanimous 65-page opinion.

“He objects to the message, not to their protected status,” Tedesco said of the business owner’s attitude toward Charlie Craig and David Mullins, the two men who wanted him to design a wedding cake. “That’s not discrimination under the law.” Phillips, owner of Masterpiece Cakeshop, had declined to make a wedding cake in 2012 for Craig and Mullins.

Lawyers for Craig and Mullins, who were married in Massachusetts but wanted to buy a custom cake to celebrate in Colorado, said Masterpiece Cakeshop discriminated against them.

“Religious beliefs do not put the cake shop above the law,” the ACLU’s Mar argued for the couple in the July 7 hearing.

The couple went to another shop and purchased a cake with a rainbow theme to symbolize their union.

Phillips likely will appeal to the Colorado Supreme Court, the state’s highest, and on to the U.S. Supreme Court if necessary because the case involves constitutional questions, his lawyer said.

As The Daily Signal reported, Tedesco argued that compelling Phillips to create a cake for the wedding of two men would violate his First Amendment rights not only to freedom of religion, but also to free speech or expression.

“The other side of the case thinks there are no First Amendment rights in the commercial context and once you open a business, you cede all First Amendment protections,” Tedesco told The Daily Signal after the hearing in Denver.

Craig and Mullins originally filed a complaint with the state’s civil rights agency.

At the time, Phillips was ordered to change his shop’s policy against participating in same-sex weddings by making custom cakes or other goods.

[W]e conclude that the commission’s order requiring Masterpiece not to discriminate against potential customers because of their sexual orientation does not force it to engage in compelled expressive conduct in violation of the First Amendment.

The court said Phillips is free to post signs disassociating his shop from certain uses of its wares and specifying compliance with non-discrimination law.

Tedesco noted that Alliance Defending Freedom, a nonprofit Christian legal aid group, had supported the right of three other Colorado bakers to refuse to make a custom cake for a Christian who asked for it to express his opposition to same-sex marriage.

In those cases, the state ruled against the customer. The appeals court missed the similarity of the two situations, Tedesco said.

“This case highlights the need for public policy that would prevent the government from coercing anyone or penalizing anyone because they believe and act on the belief that marriage is the union of a man and a woman,” Heritage Foundation scholar Ryan T. Anderson told The Daily Signal.

Anderson, the think-tank’s William Simon senior research fellow and author of the book “Truth Overruled: The Future of Marriage and Religious Freedom,” added:

The Supreme Court has said states must treat same-sex couples as married, but that does not mean states must coerce citizens, charities, schools or businesses into violating their beliefs. Freedom should be protected for all.