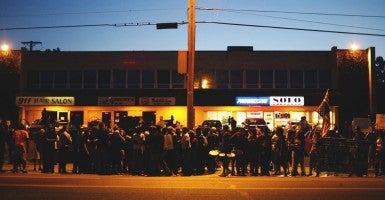 One year after Ferguson police officer Darren Wilson shot and killed 18-year-old Michael Brown in the St. Louis suburb, protests and riots broke out just as they did last year. 911 Hair Salon, owned by Dellena Jones, was one of the businesses robbed during the protests Sunday night. (Photo: Jim Vondruska/ZUMA Press/Newscom)

This week, on the one-year anniversary of Michael Brown’s death, a familiar image came out of Ferguson, Mo., as protesters faced off against police in the city just as they did 12 months ago.

For one business owner, a night of rioting and looting disrupted a year of rebuilding not just her business, but a community.

Over the course of last year, Dellena Jones, owner of 911 Hair Salon on West Florissant Avenue, found an ally eager to help her rebuild: the St. Louis Tea Party Coalition.

But on Sunday, a group of young men shattered the left window of her beauty salon as protests flared once again in the St. Louis suburb.

Jones’ shop is located in the epicenter of where the protests occurred last year in Ferguson after Brown, an unarmed 18-year-old black man, was killed by former police officer Darren Wilson.

The looters, who robbed the store after police shot and injured a young black man who allegedly fired several shots at officers, took beauty supplies such as scissors and curling irons and flipped over one of Jones’s hair dryers. It will likely cost hundreds of dollars to purchase a new hair dryer.

“I was hoping for the best and believing for the best,” Jones said in an interview with The Daily Signal of her expectations for the anniversary of Brown’s death. “We were expecting for things to be good, and if it weren’t, not [this] bad.”

For Jones, who worked for more than a decade at the salon before taking over as owner in 2012, the burglary came after a year of struggling to get her business back on its feet.

“It’s been very challenging,” Jones said. “I’ve been trying to keep up the bills here and at home. It’s proven to be very difficult and challenging and almost impossible.”

One year ago, as the nation turned to watch Ferguson following Brown’s death, Jones became a victim of the riots and looting that took place in its wake. Her store was one of more than 30 businesses looted and damaged. One business, a QuikTrip convenience store, was burned to the ground.

Jones estimated that in the last 12 months, the protests have caused her to lose roughly $75,000—a combination of lost revenue from a decrease in foot traffic along West Florissant Avenue and the cost of repairing her shop.

“You have all of these different protesters. They don’t pop into your business and say, ‘Hey, what do you need?’ or ‘Hey, are you all OK?’” Jones said. “It just seems like with the protests, it seems very selfish.”

After last year’s protests, the St. Louis Tea Party Coalition rallied volunteers to participate in “buycotts” of Ferguson businesses to show people that yes, the stores in the town were open for business, and yes, it’s safe to shop in the city.

And over the last few months, the group has also been helping Jones put her store back together. Last night, the St. Louis Tea Party coalition solicited help from a group who offered to stand guard in the store. Four men sat inside Jones’ store to make sure it wasn’t disturbed and offered to stay again Tuesday night.

“It’s one thing after another,” Dottie McKenna Bailey, a member of the St. Louis Tea Party Coalition, told The Daily Signal. “Literally, she’s in the wrong spot at the wrong time.”

Bailey, who is white, and Jones, who is black, have formed a tight bond in the wake of the protests sparked by racial tensions in the city. They are both single moms. Bailey even calls Jones her “kindred spirit.”

On Friday nights, Bailey will head down to Ferguson to sit in Jones’ shop, where they laugh, joke, and “love on each other.”

“She’s going to keep going,” Bailey said. “She has a positive attitude. She’s not blaming anybody. She’s not shouting racism. She’s just trying to love on people. I’m white. She’s black, and she loves on me like I’m her sister.”

Bailey started a GoFundMe, an online crowdfunding page, for Jones and hopes to raise enough money to redo the shop, rebrand the company, and help her hire other employees.

Such an overhaul, Jones said, would help remove the “invisible markings” left from last year’s protests and riots.

“A lot of times, people feel like they can intimidate you. They just come back and do more intimidation. If we as a people who are really loving—when these types of things happen, we have to stand up,” Jones said.

One of the biggest hurdles, the women agreed, is shaking the stigma that Ferguson may not be a safe place to visit and work. Jones said it’s been challenging to find people to work in the salon, but she and Bailey believe that the St. Louis suburb can get back on its feet.

All that’s needed is a little love.

“It’s a great community. It’s having its issues right now,” Bailey said. “But what I want to say to people is it all started in Ferguson, let’s end it in Ferguson and let it be done. What a great legacy Ferguson can have: the community came together, we loved on each other. Even the folks that were the rotten element—we welcomed them, we prayed for them, and we rebuilt our community so it’s stronger than ever. What a great message that would be to the rest of the world, so that it doesn’t have to go by the wayside.”

Bailey frequents the city’s stores to show support and makes a point to hold business lunches at the Ferguson Brewing Company. She’s become fiercely loyal toward Jones, and she noted how the “Black Lives Matter” movement leaves out important members of the black community: business owners like Jones working to provide a living for their families.

“I was thinking yesterday,” Bailey said, “she’s a black woman. Everybody’s like, ‘Black lives matter.’ And I’m thinking, do only some black lives matter? What about her life and her livelihood and her business that she’s built and her income for her family? Do her black children’s lives not matter?”