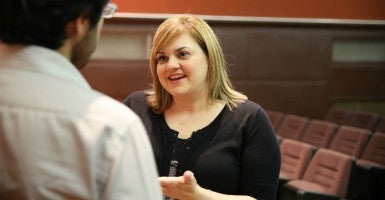 For eight years, Abby Johnson, who used to work for a branch of Planned Parenthood, didn’t just witness the fetal tissue donation process—she participated in it.

During her tenure at a southeast Texas clinic—the same location featured in the fifth undercover video shot by the Center for Medical Progress—Johnson said she would “coerce” women to sign up for studies, then reap the financial benefits.

In 2009, a year after being named “Employee of the Year” at her clinic, Johnson, 35, said she witnessed a doctor performing an abortion on an ultrasound and quit her job.

The former clinic director has since become a pro-life activist, regularly criticizing Planned Parenthood’s abortion practices. The organization attempted to discredit parts of Johnson’s account and even obtained a temporary injunction against her, but Johnson was quickly cleared of any wrongdoing.

Now, in light of allegations that Planned Parenthood is engaging in illegal activities surrounding its harvesting of fetal body parts, Johnson walked The Daily Signal through her experience with the donation process, from the moment she would ask a woman to participate in a “life-saving” study to the second her facility shipped off the body parts.

Planned Parenthood adamantly denies any wrongdoing in the recent string of videos released by the Center for Medical Progress, which have triggered multiple investigations and calls to strip the organization of its taxpayer dollars.

When a woman walks in for an abortion, what are the first steps?

Nothing is different with her coming in, signing paperwork, all of that is the same. The actual fetal tissue study—the research—is not brought up until she goes into counseling. I’m saying counseling, but it’s really when she goes in to sign all the papers. After she signs the consent form for the abortion, then we would bring up the study.

What would you say?

We would tell the client that we are participating in a study and she has an opportunity today to donate the tissue that’s removed from her uterus to a research laboratory where they will be working on life-saving treatments for various diseases such as Alzheimer’s, Parkinson’s or other types of medical studies. We would tell her this is an opportunity for her to possibly save the life of someone else by donating this tissue. By creating this altruistic scenario, women would almost always consent and say, “Yes, absolutely.”

Was there a strategy behind the way you phrased that question?

We never discussed, “They may want just a leg, or an arm, or these specific organs.” That would create a sense of humanity in their unborn child. And really, we would even shy away from calling it fetal tissue research because just calling it tissue sanitizes it—the women don’t necessarily think about the body of their baby, they’re just thinking about blood and tissue.

Did Planned Parenthood officials train you on what language to use?

They did. In the fifth video that was released, that was actually my affiliate, where I worked. Missy Ferrell—Melissa, we call her Missy—she was head of the research department when I worked there as well. Anytime we would embark on a research project, someone from the research team would come in and say, “This is what we’re doing, this is how you need to talk to the clients about it.”

Were Planned Parenthood employees told about the “life-saving treatments” they were supposedly collecting tissue for?

We had absolutely no idea what the tissue was going to be used for. We weren’t told that information. We simply had a contract with a research facility, and they said, “Hey, we need to buy specimens from you, how many can you provide? We’ll give you ‘X’ amount of dollars for each specimen you send.”

Did you ever receive compensation associated with these research projects?

At that time, and this was of course when I worked there until 2009, we as staff members were compensated for every patient that we were able to enroll in a study. It creates coercive tactics.

How much were you compensated?

It depended on how much Planned Parenthood was getting per research participant. For our fetal tissue study, we got paid about $200 per baby that we sent. If I recall correctly, I think the compensation to the staff was about $20 per enrollment. If it was a minor study … one time we did a study where they were testing different kinds of pap brushes … we got about $5 for each patient.

Once a patient is enrolled in a fetal tissue study, what happens next?

Once the patient is enrolled, she’s taken back to the procedure room. The abortion is performed, and nothing is different in the actual abortion procedure. We don’t use any different types of tools or anything like that.

Doctors aren’t allowed to change the way they perform an abortion to harvest tissue—how is this legal?

Planned Parenthood has done such a good job covering themselves because both of those procedures are considered acceptable standard of care. They can say, “We’re not doing the manual aspiration to get a more intact specimen; we’re doing it because this woman’s concerned about pain and this would be less painful than the vacuum aspiration procedure.”

After the abortion is performed, what happens next?

At that point, what did the product of conception technician do with the different body parts?

If it was during a time that we were participating in a research study, they would pick out whatever was requested—whether it was a specific organ, eyeballs, whatever it was—they would take that out and put that in a specimen bag.

Then we would put all of the bags that were going for research in a Styrofoam container inside a freezer, and the ones that were not went into a different bag. With each specimen we had to make a copy of the consent form they signed and put it into the specimen bag.

At the end of the day, we would ship on dry ice the specimens to the company that we were contracted with. Sometimes research labs will actually come and pick up the box, but in our case we shipped it off.

How much did shipping typically cost?

The researchers provided the Styrofoam box and dry ice to Planned Parenthood. Literally the only cost we had was shipping the box. And that was about $20 every time we shipped. So Planned Parenthood is getting $200 per specimen, and we’re taking all the specimens, putting them in one box and shipping it off for $20. The different fetal body parts are not shipped individually.

Does Planned Parenthood have to hire an employee to sort through the body parts and put them in these containers?

It’s not like we hire someone just to separate these parts for research because after every single abortion, a product of conception technician reassembles the parts of the baby to make sure that everything was removed. If they don’t, that can be fatal for a woman. We had several instances where our product of conception technician failed the patient because they would come back in and there would be a leg still in their uterus and that causes very serious infection.

To send the body parts to a research laboratory, it’s just a matter of separating them into different bags.

Do you think Planned Parenthood is doing anything illegal?

The way that the law is written currently, it allows them to charge for these certain items as long as they are coded correctly on a line-item budget. And that’s the problem with the law, is that it’s so subjective as far as the cost. As long as they code it as, we need $100 for extra work in collecting the tissue—well, there is no extra work. And that’s what the videos are showing, with Dr. Mary Gatter, she said, “We don’t have to change anything.” That’s true: they don’t have to do anything.