Sorry, Obama: We Can’t Have an ISIS Strategy Without a Syria Strategy 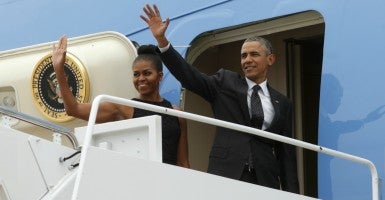 Tired of the bantering about the deeply-flawed Iran nuclear deal? No worries—there are plenty of other scary scenarios to mull over during your morning coffee beyond the ayatollahs splitting atoms.

For instance, what’s our plan for when the regime of Syria’s Bashar Assad falls? Yes, I said “falls.”

If you haven’t noticed, things are looking pretty darned bleak for Bashar & the Boys. Assad even admitted on Sunday that his army is suffering from a “lack of human resources,” according to news reports.

“A lack of human resources”? I guess that’s?one way to put it.

What Assad was getting at was that his army is suffering defections, desertions, draft-dodging and deaths left and right—and as a result, he’s hurting on the battlefield.

Even with shifting battle lines, various sources estimate that more than half of Syria has come under the control of anti-government rebels, jihadists and terrorists over the last four-plus years of civil war.

While not inevitable, Assad’s end could be near.

But while the demise of Assad’s dynastic dictatorship would be good for America—he’s no friend of ours, supports terrorism and uses chemical weapons—the ensuing power vacuum would be a problem.

Syria is a snake pit.

The power vacuum created by the Syrian central government’s collapse could be filled with bad actors such as the Islamic State or al-Qaeda affiliates (for example, the Nusra Front)—or pure chaos.

One thing we pretty much know for sure is that it won’t be the military element of the U.S.-supported Syrian opposition, which Team Obama has struggled to train and equip, in charge.

In fact, Secretary of Defense Ash Carter told Congress in early July that the Pentagon had been able to turn out only 60 of a planned 15,000 Syrian opposition soldiers so far.

(Reuters reported yesterday that Nusra kidnapped the head of one U.S.-armed group.)

While firm figures are elusive, this U.S.-formed force would face probably upwards of 50,000 ISIS, al-Qaeda and other jihadists and 100,000 or more pro-Assad Syrian, Hezbollah and Iranian troops—if the regime hangs on.

Even with Turkey getting into the fight—and at the moment it appears it’s in more to get at the Kurds than ISIS—our Syria strategy seems to be bore-sighted on the violent Islamist extremists.

That’s OK up to a point.

While all agree that knocking out ISIS and al-Qaeda is important, we can’t ignore the impact of the Syrian state going bust—one result of which is the likely strengthening of the terrorists.

While Team Obama hangs its hat on the development of a political/military opposition to fight the terrorists and—presumably—replace the Assad regime when it implodes or explodes, that plan isn’t going very well.

It’s almost as if—apart from halting United Nations peace efforts—the Obama administration is in “wait-’n’-see” mode, as bands of bad guys beat each other up, before getting serious about a Syria strategy absent Assad.

It’s about time we get one.