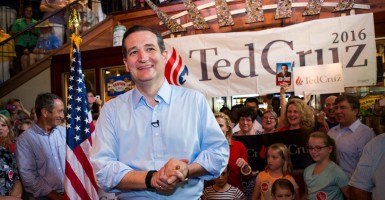 ATLANTA, Ga.—During a speech today, Sen. Ted Cruz told a group of conservative activists the first actions he would take should he be elected president.

Speaking at the Red State Gathering, Cruz said that there are five policies he would implement on his first day in the Oval Office.

The first action would be to “rescind every illegal executive action taken by Barack Obama,” including his “executive amnesty.”

Next, he would “instruct the Department of Justice to open an investigation into Planned Parenthood” and to prosecute any criminal conduct uncovered.

Then he would instruct the Department of Justice and the Internal Revenue Service to “cease persecuting” individuals seeking to practice their faith in their workplace.

The Little Sisters of the Poor, he said, “would receive a letter in the mail that their case has been dismissed.” He said they would also receive “an invitation to the White House to tell their story to the world.”

Then he would “end the catastrophic Iranian nuclear deal.”

Cruz argued that by lifting economic sanctions on Iran, the Obama administration had become “the leading global financier of radical Islamic terrorism.”

Finally, he would “begin the process to move the U.S. embassy in Israel to Jerusalem.”

Moving the embassy to Israel’s “eternal capital,” he said, would send “a message to the world that we stand with our allies.”

Cruz also condemned House and Senate leadership for seeking “show votes,” failing to fight cronyism and corporate welfare and allowing the reauthorization of the Export-Import Bank.

.@tedcruz: “The only force strong enough to turn this country around is we the people.” #RSG15 pic.twitter.com/XOWAXdii5Z