How to Combat Putin’s Propaganda War 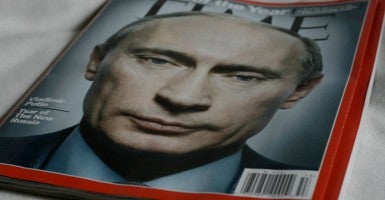 The war is on.

Russian President Vladimir Putin has unleashed a vast information network across Central and Eastern Europe, as well as within the European Union.

This network uses a very developed and coordinated use of social media networks and traditional news media outlets, as well as influence among European politicians, like former German Chancellor Gerhard Schroeder.

In addition, they have provided funding for anti-systemic political parties like the National Front in France.

What is Putin’s goal through all of this?

According to Anne Applebaum, who has co-authored a new study with Edward Lucas, “Wordplay & Wargames,” Russia’s goals are not especially ideological in nature, but simply to keep Putin and his inner circle in power.

The biggest threat to this goal is the anti-corruption movement represented by the Ukrainian Maidan uprising.

Attacks on the revolution in Ukraine and undermining any desire of Russians to join the West are central strategies.

The Russian government, under Putin, is therefore aggressively using its propaganda network to extend its influence and wage a war of information across the world.

In Europe, Russia is working to break apart the European Union and destabilize NATO. Russia may not be able to achieve either, but it can wreak havoc in the process.

Needless to say, as far as the European Union is concerned, Russia is pushing on an open door as the Euro currency crisis rolls on.

It is not the first time, of course, that the United States has faced information and ideological warfare with Russian and Soviet masterminds.

The Cold War was won by the West partly on the battlefield of ideas.

Applebaum, who spoke this month at the Center for European Policy Analysis (CEPA), says the United States must move beyond the lessons of the past.

She argued that promoting positive visions of the values of democracy, as the U.S. has traditionally done, is not enough.

The West needs to retool its arsenals. The Russian propaganda message is carefully tailored to each country—particularly in smaller countries like the Czech Republic, where weak media markets allow easy manipulation of facts by Russian information agents and networks.

In larger countries with a more robust and established press, like France, it is more difficult.

A recent report by the European Endowment for Democracy in Brussels, “Bringing Plurality and Balance to Russian Language Media,” offers ideas to counter the Russian onslaught.

One idea is to fill the gap in local news, experienced by Russians. Local issues are simply not covered by Russian media, in order to keep citizens in ignorance.

Another counter-strategy for the U.S. and its allies is to create Russian-language content and broadcast it to Russian populations in Europe, and eventually into Russia itself.

Both strategies have the goal of raising awareness, in Europe, of Russia’s nefarious actions, investments and disinformation.

This awareness appears to be growing in the wake of Russia’s invasion of Ukraine.