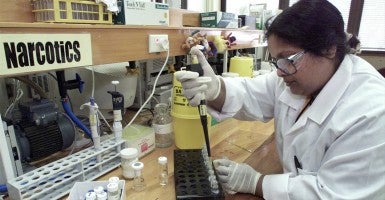 Ohio lawmakers are expected to formally introduce legislation Wednesday that will require welfare recipients to pass a drug test before receiving benefits.

Republican State Representatives Tim Schaffer and Rob Maag are sponsoring the bill that, if passed, will implement a two-year pilot program in three counties within the Ohio Works First (OWF) cash assistance program.

The new welfare pilot program “will protect tax dollars” and “offer treatment to the addicted while allowing their children to continue receiving assistance,” according to a press release from Schaffer and Maag.

Under the new proposal, all welfare applicants will be required to complete a screening that evaluates whether a person is likely to have substance abuse issues.

If the screening shows that a person is likely to be dependent on drugs, the applicant must take a drug test to proceed.

In the event that the drug test is positive, the person will not receive any welfare benefits. However, applicants will instead be offered cost-free drug treatment, and their children and dependents will still be able to access assistance funds through a third party protective payee who can accept the benefits on their behalf.

In a 2012 Heritage Foundation report on welfare spending, research fellows Robert Rector and Katherine Bradley argue that as welfare spending approaches $1 trillion per year, taxpayers deserve to know their money is being spent wisely.

“Those who pay for the welfare state can properly insist that their aid go to those who are truly in need and not be wasted on frivolous or self-destructive activities, such as illegal drug use,” Rector and Bradley wrote.

Schaffer and Maag’s new legislation seeks to “continue the fight against the drug epidemic that is ravaging our state,” said Schaffer.

“This program will not be a means to deny benefits, but rather a means to identify those who need treatment,” Schaffer explained.

“It will keep taxpayer dollars out of the hands of drug dealers, protect children and get folks off of drugs and back on their feet,” he added.

The introduction of this bill comes after a report cited by Schaffer and Maag that studied how to best reform the OWF program. In its findings, it showed that substance abuse and inability to pass a drug test were the top barriers to economic independence and reducing reliance on welfare aid.