Why Young “Conservatives” for Energy Reform Aren’t What They Seem 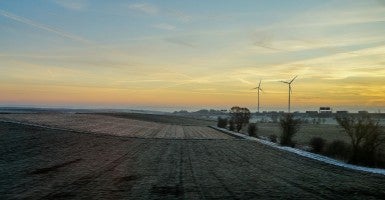 Four guest speakers, including two current senators, shared one thing: a desire to see continued government subsidization and favoritism in the energy markets.

At last week’s annual Young Republican National Convention in Chicago, this message continued to be delivered.

Far from advocating conservative policies, YCER seeks to continue to drain money from the public in order to provide subsidies for high-priced renewable energy sources. And these subsidies are substantial.

Hardly conservative or reformist, Tremaine boasts of being partly responsible for the state of Connecticut agreeing “to purchase 20 percent of its energy needs from renewable sources by 2010 with the percentage increasing incrementally to 100 percent by 2050.”

The founder of Young “Conservatives” for Energy Reform, Michele Combs, has one thing right: We can “look to the states” to see what the future of this supposed “clean and efficient energy future looks like.”

When energy in excess of that needed by the homeowner is produced, an electric utility can be forced to effectively purchase this excess energy (through credits) at retail value regardless of whether demand exists. These costs are spread to other consumers.

Other states, such as California, are imposing renewable energy mandates, forcing the addition of renewable energy generating capacity to the grid regardless of whether lower-cost options exist.

Ask San Diego residents how they like paying an extra 29 percent for electricity each month compared to Jacksonville, Florida.

Despite this reality, Michele Combs, the founder and leading spokesperson for YCER, recently boasted that legislators in her home state of South Carolina “passed a bill expanding financial options and incentives for solar power, beyond our already successful tax credit.”

She also points out that many districts in South Dakota and Iowa, regions likely to benefit from further wind subsidies, are represented by Republicans.

To be sure, Democratic and Republican politicians alike are susceptible to breaching fiscal and economic sanity in an effort to please special interests within their districts.

But a continuation of such favoritism will only saddle the economy with yet more inefficiencies.

We aren’t stuck at 2-percent economic growth by happenstance.

Zilmer declared that climate change is a leading national security threat and implored so-called skeptics in the audience of conservative staffers to reconsider their view on global warming.

This shrillness is nothing new for Zilmer.

In 2014, he co-authored a report as a member of the CNA Military Advisory Board entitled “National Security and the Accelerating Risks of Climate Change.”

The report emphatically states, “The national security risks of projected climate change are as serious as any challenges we have faced” including “containment and deterrence of the Soviet nuclear threat during the Cold War to political extremism and transnational terrorism in recent years.”

Almost laughably, the Zilmer report attests that “[a] recent example of one such non-state actor enabled by the impacts of climate change is Al Qaeda in the Islamic Maghreb (AQIM) in Mali.”

The authors blamed the empowerment of terror groups in part on the “desertification and food insecurity exacerbated by climate change.”

Of course, drought certainly negatively impacts the economy. But rather than place the blame for terror and poverty on human-caused climate change, the truth is better served by pointing out what truly has created the political crises in Mali—the subjugation of the populace into corruption and economic bondage.

As explained in the 2015 Index of Economic Freedom, “Mali has yet to open its domestic economy to global markets. Tariff rates remain high, and political unrest and security concerns deter foreign investment.

“These issues are exacerbated by a weak rule of law. Corruption is present in all levels of government and has spilled over into the judiciary, which remains notoriously inefficient.”

So what really lies behind this mirage of grassroots conservative support for more government mandates and funding of the energy sector?

A glance at page one of the climate change CNA report partially authored by Zilmer lists the Energy Foundation as a sponsor.

This is the same the Energy Foundation that funds groups such as Dogwood Initiative (an entity that seeks to ban the expansion of U.S. coal exports from British Columbia ports).

But here’s where it gets really strange.

The founder of Young Conservatives for Energy Reform is Michele Combs.

The foundation, which funded the climate change national security threat assessment and Dogwood Initiative, also provided more than 75 percent of the total revenues of the Christian Coalition in 2013, to the tune of $535,000 in 2013.

For what purpose did this far-left environmental group saturate Christian Coalition with dollars?

According to the Energy Foundation’s 990, the purpose of these grants is “to support education and outreach to build a clean energy future” and “to advance policy solutions for a stable climate.”

It should be noted that the mission statement of the Christian Coalition is as follows:

Which category does advancing “policy solutions for a stable climate” fall under?

And how does supporting a government-subsidized and controlled energy system qualify as “pro-family”?

By funding both Christian Coalition and reports by retired military personal, the Energy Foundation is able to generate the appearance that renewable energy subsidies command the support of the conservative, religious and national security voting blocs.

The YCER founder implores us to “listen to grassroots conservatives” on energy reform and insists that “the view from the ‘real America’ is often starkly different from the view from Capitol Hill.”

And grassroots conservatives from “real America” oppose these cronyist handouts.

We want opportunity for all, favoritism toward none.

The way of true conservative energy reform is clear.

Congress must resolve to rein in the Environmental Protection Agency (EPA).

As verified by the Supreme Court, the EPA continues to reach beyond its congressional mandate, threatening to drive up energy costs further nationwide.

Eliminate all subsidies across the sector. Enact commonsense policies, such as constructing the Keystone Pipeline and permitting oil exports.

The agenda of Young Conservatives for Energy Reform represents the entrenchment of what Senator Rand Paul calls the Washington Cartel.