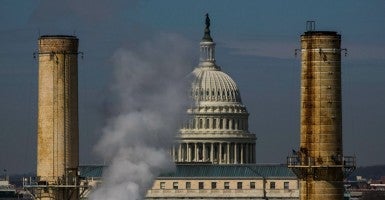 The Obama administration unveiled its climate change regulations for new and existing power plants, calling the plan “the biggest, most important step we’ve ever taken to combat climate change.”

It may be the most “important” from a top-down, regulatory mandate for high energy prices, but it won’t accomplish much, if anything, in terms of combating climate change.

Even though electricity generation accounts for the single largest source of carbon dioxide emissions in the United States, the estimated reduction is minuscule compared to global greenhouse gas emissions.

Climatologists estimate that the administration’s climate regulations will avert less than two hundredths of a degree Celsius by 2100.

In fact, all the plan will do is bring about higher energy bills, lost income, fewer jobs and a weaker economy – with little to no impact on the Earth’s temperature.

The role of the federal government should be not to promote or restrict any energy source or technology, but instead to enforce free-market policies that generate innovation and provide competitive prices.

In fact, the federal government has done much more to restrict the development of these energy sources than promote them, with Obama’s climate regulations being the latest blow.

Obama is upping the ante on existing power plants, forcing power plants, on average, to cut carbon dioxide emissions 32 percent below 2005 levels by 2030, with interim targets starting in 2022.

This will likely spell the end of new coal-fired power plants since no credible basis exists to state that CCS is adequately demonstrated today.

CCS faces questions about technical scalability, regulatory challenges, long-term liability of storing the captured CO2 and above all, cost that make it a non-option.

And that CCS yields no environmental benefit makes the requirement farcical.

The new regulations would drop that to 27 percent by 2030, forcing states to switch to more expensive, less reliable renewable power.

But “the war on coal,” as many are dubbing the regulations, is truly a war on American families and businesses.

Further, a regulation that increases energy prices will disproportionately eat into the income of the poorest American families.

The cumulative economic impact of higher energy prices will be hundreds of thousands of jobs lost and more than $2.5 trillion in lost economic growth.

To allegedly soften that blow, the EPA is touting the notion of flexibility to the states, arguing that states can set up regional cap-and-trade programs, increase renewable or nuclear power generation or mandate more energy efficiency standards.

States will have one year to develop and submit their own compliance plan or develop regional plans with other states, though the EPA will grant extension waivers as long as two years.

No matter how states concoct their plans, the economic damages will be felt through higher energy costs, fewer job opportunities and fewer choices through implementation of efficiency mandates that remove decision making from producers and consumers.

The EPA’s idea of flexibility will not soften the economic blow; it merely means that families, individuals and businesses will incur higher costs through different state or regional-imposed mechanisms.

And by placing the entire onus on the states to devise their own carbon-cutting plans, the federal government evades all accountability to Americans and leaves state officials to take the political heat.

The climate benefit that Americans receive for higher electricity rates, unemployment and lower levels of prosperity is almost, if not completely, nonexistent. Government regulators could limit all greenhouse gas emissions produced by the United States, and that number jumps to only a tenth of a degree of averted warming.

Therefore, Congress and state officials should not wait on the courts to act in this matter.

Any delay in fighting the entirety of the regulation could cause the closer of many reliable, low-cost power plants, mandate pricier alternative energy and set steep prices on carbon dioxide for regional cap-and-trade programs.

Members of Congress and state governments should fight the regulation, rather than settling for a slightly more palatable version of the regulation that will still bring injurious economic results and no climate or environmental benefit.