Why Mark Levin Says the GOP Needs a Facelift 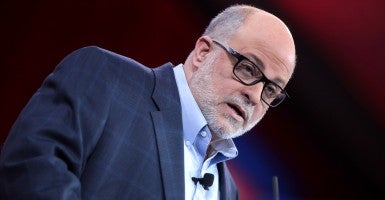 Mark Levin is fed up with the Republican leadership in Congress.

At the Young America’s Foundation’s National Student Conference in Washington, D.C., the popular talk radio host and author spoke with The Daily Signal about the future of Republican Party. Levin’s new book, “Plunder and Deceit,” comes out Tuesday.

Levin was quick to embrace Meadows’ move to oust Boehner, inviting him on his radio show Tuesday night and urging conservatives to stand with him. Levin called it a step in the right direction for the conservative movement.

Boehner “is essentially delivering for Barack Obama everything Barack Obama wants,” Levin told The Daily Signal. “Just because you’re dressed up as a Republican doesn’t make it so.”

Levin said Republican leaders have fostered Obama’s agenda rather than delivering on their election promises to the American people.

“These men have helped Obama oversee the biggest explosion of government both in spending and in power ever,” Levin added. “They have no strategic vision whatsoever, and of course, they have no tactical vision at all.”

According to Levin, Boehner and McConnell have done more to “dispirit” Republicans than Obama. Since the GOP gained a Senate majority in the 2014 election, Levin said Republicans have not lived up to their responsibilities.

In addition, Levin said Republicans erroneously believe their purpose in Washington, D.C., is bipartisanship, when it should be advancing the “cause of liberty and prosperity and constitutionalism.”

“Why would you want to participate in a bipartisan government when the president of the United States is openly usurping and openly attacking the the private sector and individual sovereignty?” Levin said. “Why would you participate in that? Why wouldn’t you do everything you can to throw a wrench in his agenda?”

Despite supporting the actions of Meadows and other conservatives, Levin confessed that their attempts are not likely to succeed. Nevertheless, he commended their efforts.

“You have to start a movement, a force, an effort somewhere,” Levin said. “If this was easy, John Boehner wouldn’t be speaker right now.”