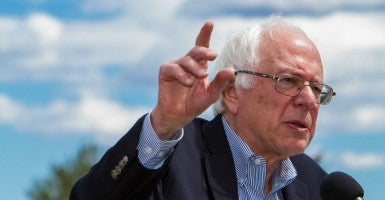 “I am very honored to receive the endorsement of one of the great environmental organizations not only in America, but in the world,” Sanders, I-Vt., said during the event.

He added that “the debate is over.”

He said he is opposed to a so-called “all of the above” energy strategy, and the nation must transition to use only renewable sources of energy.

“We need to transform our energy system away from fossil fuel and into sustainable energy,” Sanders said.

He said that climate change is not just an environmental issue, but an economic and national security one as well.

“Our task is clear,” Sanders said. “We must dramatically reduce greenhouse gas emissions.”

“You are now part of a photo opportunity,” @BernieSanders jokes as they ask people to stand behind the podium. pic.twitter.com/jhK52raNG0

He called for programs to allow more American families to be able to afford to put solar panels on their houses, and to help low-income people “retrofit” their homes to make them more energy-efficient.

He also called for a carbon tax.

Sanders said he remains “vigorously opposed” to Keystone XL, a proposed oil pipeline that would carry oil from Canada to Nebraska, where it would meet with existing pipelines that would carry it to refineries on the Gulf Coast.

“If you’re concerned about climate change, say no to the Keystone XL pipeline,” Sanders said.

Sanders called himself “perhaps the most progressive member of Congress” on the issue of climate change.

This group is dedicated pic.twitter.com/7BF9E9S41d