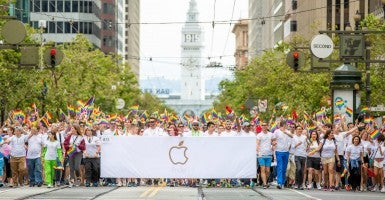 What do you do when you can’t persuade the American people to embrace your values?

You use government coercion to impose those values on people. And you get rich corporate elites to lobby government on your behalf.

Last week, Democrats in both houses of Congress introduced a bill they call the “Equality Act.” This bill adds the phrase “sexual orientation and gender identity” to more or less every federal law that has protections on the basis of race.

The Human Rights Campaign, the LGBT activist group behind the bill, has been trumpeting that “Corporate Giants Announce Support” for the bill. That’s right: “corporate giants” want the federal government to coerce and penalize mom-and-pop flower shops because they have a different set of cultural values.

This sort of special interest rent-seeking has a name: cultural cronyism.

In “Truth Overruled: The Future of Marriage and Religious Freedom,” I explain how cultural cronyism has been the primary technique the Left has used to redefine marriage.

The basic idea is that LGBT activists couldn’t persuade a majority of citizens to vote to redefine marriage, so they got five unelected judges to redefine marriage for the entire country. Now, they’re using corporate giants to pressure lawmakers in D.C. to enact legislation that would eliminate any dissent.

Remember the way that “corporate giants” attacked the Indiana religious freedom bill? That wasn’t a fluke. It was part of a well-coordinated, well-financed campaign to eliminate religious liberty protections. CNA reports:

A leader in LGBT grant-making has told business leaders that he wants to shut down the political fight for religious freedom exemptions in the U.S. within three years.

And these words are not empty rhetoric. A CNA investigation has found that millions of dollars have been poured into efforts to combat religious freedom exemptions in the United States.

Indeed, the CNA report shows that one LGBT group gave over $275,000 to defeat religious liberty protections in Oregon.

As I recount in Truth Overruled, Oregon is the state where an evangelical baker was fined $135,000 for declining to bake a cake for a same-sex wedding.

Public policy should not be the result of cultural cronyism.

Whatever you think about gay marriage, and regardless of whether you’d bake a gay wedding cake or not, all Americans should agree that the government should not be coercing bakers into violating their beliefs and fining them if they refuse.

The problem is that liberal activists have undone core elements of the American Founding.

The result is the overreach of progressive government and the administrative state, the sexual revolution’s elevation of desire over reason and the whittling of religious free exercise down to the freedom to worship. We need to counter all of these developments. Policy organizations, religious and civic organizations and legal organizations will have to play their roles in empowering the citizenry to reclaim their government and culture.

I offer a roadmap for these groups to follow in Truth Overruled.

Without a return to the principles of the American Founding—ordered liberty based on faith and reason, natural rights and morality, limited government and civil society—Americans will continue to face serious and perplexing challenges. The dilemmas faced by bakers and florists and charities and schools are only the beginning.