Q&A: Turkey’s New Push to Fight ISIS And What It Means for US 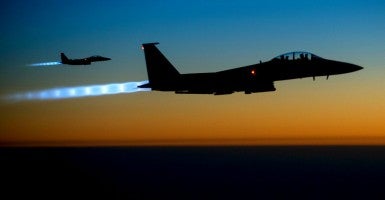 Two U.S. Air Force F-15E Strike Eagle aircraft fly over northern Iraq Sept. 23, 2014, after conducting airstrikes in Syria. The aircraft were part of a large coalition strike package that was the first to strike Islamic State of Iraq and the Levant (ISIL) targets in Syria. (Photo: US Department of Defense Flickr / CC BY-NC-ND 2.0 Edited by Daily Signal)

Turkey, a NATO member, conducted multiple airstrikes over the weekend in both Syria and Northern Iraq.

Here’s what you need to know from Luke Coffey, Margaret Thatcher fellow at The Heritage Foundation and a U.S. Army veteran.

Q: Whom is Turkey fighting, and where have they launched air strikes?

A: Turkey says it is fighting terrorists on two fronts: against ISIL in Syria and against PKK (a Kurdish terrorist organization), operating in Turkey but based in northern Iraq.

When news reports say that Turkey is attacking Kurds, they are in fact attacking the Kurdistan Workers’ Party, commonly referred to by its acronym PKK.

The PKK is recognized as a terrorist organization by the U.S. and our European partners. Since 2013 there has been a fragile cease-fire in place between the PKK and Turkey.

However, the PKK claimed responsibility for the killing of two Turkish police officers last week, and this has effectively ended the cease-fire.

In addition to the PKK attack, there has been a number of recent attacks by ISIL inside Turkey.

After sitting on the fence for years, Turkish President Recep Tayyip Erdogan had no choice but to retaliate against ISIL.

It is important to note that the PKK and ISIL are not working together.

Q: Why did Turkey request the rare emergency NATO meeting? What will happen there?

A: As part of its response, Turkey has invoked Article 4 of the North Atlantic Treaty, calling for emergency consultations in NATO. NATO has expressed solidarity with Turkey’s actions, but this is more symbolic than anything else and does not commit the Alliance to any military action.

According the news reports, NATO’s secretary general, Jens Stoltenberg, said Turkey has not requested “substantial NATO military support” ahead of the NATO meeting.

Article 4 has been invoked only four times in NATO’s history. Three of these occasions have been by Turkey, and of these, two have been because of Syria.

A: We should have low expectations for what we hope Turkey will do against ISIL. So far there have only been a few airstrikes, a lot of arrests (majority of arrests aimed at PKK supporters), and no commitment made by Ankara for Turkish ground forces.

A: Turkey has agreed that the U.S. can use the Incirlik Air Base in southern Turkey for operations against ISIL.

This is a positive step toward re-establishing historical U.S.-Turkey cooperation against regional terrorism.

Turkey will also play a more direct role in sealing its border with areas controlled by ISIL.

In the long run, this will make it more difficult for ISIL to get recruits and resupplies. Obviously, this will help the American-led coalition.

Q: What is the suggested “No-ISIL Zone”?

A: According to news reports, Turkey and the USA have agreed to a so-called “No-ISIL Zone” in northern Syria, or a buffer zone to alleviate some of the refugee burden Turkey is carrying.

Because neither Turkey nor the U.S. will use its own ground troops for this operation, it is not clear how this military action will be executed.

Since Turkey’s military response to ISIL will be mainly from airstrikes, we should not get our hopes up for the creation of a buffer zone in Syria unless Ankara chooses to work closely with the Syrian Kurds.

While this is a possibility, it remains to be seen if this will happen.