Mike Lee Secured a Commitment From GOP Leadership to Repeal Obamacare With a Simple Majority. Here’s How. 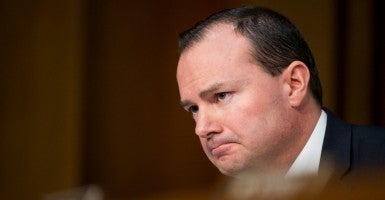 Conservative Sen. Mike Lee struck a deal Monday with Senate Majority Leader Mitch McConnell (R-Ky.) to repeal Obamacare through a budget tool known as reconciliation, which would allow the Senate to roll back the health care law with a simple majority (51 votes).

The Utah Republican secured the commitment from McConnell in exchange for the withdrawal of Lee’s amendment to a highway funding bill to repeal the Affordable Care Act. No timetable was given when the Senate will use reconciliation.

“Republicans are united in working to repeal the broken promises of Obamacare and allow our country to start over fresh with real health reform that Americans deserve,” McConnell said today in a joint statement with Lee. “We will continue our effort to use reconciliation—as the budget makes clear—to fulfill the promise we made to our constituents.”

“Americans deserve quality health care at affordable prices, and Obamacare is giving them the exact opposite,” Lee continued. “A Senate vote to repeal Obamacare on a simple majority basis through reconciliation is the best way to pursue that goal.”

Lee’s offer came after another dramatic day on Capitol Hill, when it was revealed that a member of his staff sent an email to conservative groups—including The Heritage Foundation, the parent organization of The Daily Signal—saying the amendment “should be scored,” according to multiple news reports. Conservative groups like Heritage Action, a sister organization, use these “scores” to hold members of Congress accountable for their votes.

After learning about the email, Lee apologized to McConnell, said Conn Carroll, the senator’s spokesman.

“This email is not how Sen. Lee does business,” Carroll said in a statement. “As soon as Sen. Lee found out about the email, he contacted McConnell, met with him, and apologized.”

Earlier Monday, Lee planned to invoke a Senate rule in bringing the amendment before the upper chamber. A simple majority—51 votes—would have been needed for the legislation to be added to the highway funding bill and its underlying legislation, H.R. 22, which addresses a provision of Obamacare.

As with Lee’s parliamentary tactic, a simple majority is needed for Obamacare to be repealed through reconciliation.

>>> Conservatives Push for Repeal of Obamacare Through Reconciliation

The Utah senator’s attempt to force a vote on repealing Obamacare with a simple majority came after an intense weekend of infighting between Republican Senate leadership and its conservative faction, led by Lee and Sen. Ted Cruz, R-Texas.

Several senators, including Lee, Cruz and McConnell, attempted to use the highway bill as a vehicle to address a number of issues, including the Export-Import Bank, Iran and Planned Parenthood.

Despite requests from conservative senators, McConnell allowed votes on only two amendments: one to revive Ex-Im, and a second to repeal Obamacare.

The Senate advanced the amendment to reauthorize Ex-Im this weekend, and late Monday night, it approved its addition to the highway bill, 64-29.

The upper chamber’s approval of the amendment earned the ire of Cruz, who criticized McConnell for partnering with Senate Minority Leader Harry Reid, D-Nev., to revive Ex-Im.

“The one person who had the ability to make sure the Ex-Im Bank remained expired was the majority leader,” Cruz said in a statement. “Rather than keeping the promise he made to every member of his party, he turned his back on the American people and allowed one of the worst examples of corporate welfare our nation has ever known to be resurrected from the dead.”

The bank provides taxpayer-backed loans and loan guarantees to foreign countries and companies for the purchase of U.S. products. Its charter expired June 30.

Though the majority leader allowed votes on those two amendments, several others were denied roll-call votes.

Cruz introduced a measure that would require Iran to recognize Israel’s right to exist and release four American hostages.

Lee introduced an amendment that would have defunded Planned Parenthood.

Republicans in both the House and Senate have called for the nation’s largest abortion provider to be stripped of its federal funding after undercover videos were released that allegedly showed two Planned Parenthood executives discussing the sale of aborted fetal organs.

Congress has until Friday to address the financial future of the Highway Trust Fund. The House passed its own version of the highway bill earlier this month, which would extend federal funding for transportation projects for four and a half months.

The Senate’s bill would extend the Highway Trust Fund for six years, although it would pay for only the first three years.

>>> Commentary: Why the Senate Plan to Save the Highway Trust Fund Falls Short

Though the clock is ticking for Congress to pass a highway bill, House Majority Leader Kevin McCarthy, R-Calif., told reporters the House wouldn’t take up the Senate’s version.

Instead, congressional leaders are considering a number of options, including passing a three-month highway bill.

This story was updated to include quotes from a joint statement issued by McConnell and Lee.