What Is Life Really Like in North Korea? One Woman’s Story 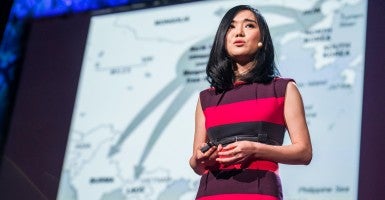 As a child growing up in North Korea, Hyeonseo Lee believed that her country was the best on the planet.

She discusses this at length in her new novel, “The Girl With Seven Names: A North Korean Defector’s Story,” and spoke with The Daily Signal about her experiences as well.

As Lee explains, propagandized since birth, the people of North Korea know nothing of what life is like outside their own borders. The brutal dictatorships of Kim Jong-un and his predecessors Kim Jong-il and Kim Il-sung have socially engineered a system void of any freedoms whatsoever, and have positioned themselves as the sole source of information in the country.

“Three generations of Kim regime leadership brutally repressed the people, to the point where the North Korean people don’t even realize that there is something beyond North Korea,” said Olivia Enos, research associate in the Asian Studies Center at the Heritage Foundation. “And it’s not getting better.”

There is a complete lack of freedom of thought and belief in the North Korea Lee grew up in: no freedom of the press, no freedom of movement and no freedom of speech. Nights are pitch-black due to power outages or lack of electricity, neighbors and friends are encouraged to spy on one another and becoming pregnant by a Chinese man is punishable by death.

Life gets infinitely worse for anyone who speaks out against the regime in any way. These perceived traitors can be tortured, thrown into secret prison camps called kwanliso or publicly executed. Their families are also punished.

“Guilt by association in North Korea means that if you commit a crime, not only will you be punished, but also three generations of your family will be punished. Your parents, your grandparents, your grandchildren,” explained Phil Robertson, Asia deputy director at Human Rights Watch.

On February 7, 2014, the United Nations Human Rights Council released a Report of the Commission of Inquiry on Human Rights in the Democratic People’s Republic of Korea detailing the volume and horror of the human rights abuses of the Kim regime, finding the government guilty of crimes against humanity. A satellite photo of the Korean Peninsula that shows the bright lights of South Korea and China compared to the blackness of North Korea at night. (Photo: Flickr)

“Even if you are a North Korean that doesn’t find themselves in a prison camp situation and you’re living a normal North Korean life—to say that ordinary North Korean people are enduring unbelievable repression of freedom is accurate,” Enos said.

The crimes against humanity in North Korea include extermination; murder; enslavement; torture; imprisonment; rape; forced abortions and other sexual violence; persecution on political, religious, racial and gender grounds; the forcible transfer of populations; the enforced disappearance of persons; and the inhumane act of knowingly causing prolonged starvation.

The U.N. inquiry further details nearly 400 pages of horror stories, ranging from government officials confiscating food from those in need to women in the kwanliso prison camps who were tragically forced to drown their own babies.

“The gravity, scale and nature of these violations reveal a state that does not have any parallel in the contemporary world,” according to the report. In fact, the U.N. Human Rights Council goes so far as to point out “many parallels” between North Korea and Nazi Germany.

Unlike with Nazi Germany, though, the international community cannot claim ignorance as an excuse for not intervening to stop the human rights abuses.

“Now is the time for action. We can’t say we don’t know anymore. The suffering and tears of the people of North Korea demand action,” Michael Kirby, the chairman of the U.N. inquiry, pleaded in the report. “Our generation must tackle this issue urgently and collectively, and indeed the world will judge us by our response.”

It raises the question: How should the world respond?

One of the recommendations made by the U.N. Commission of Inquiry was to refer North Korea to the International Criminal Court, where Kim Jong-un and his officials would be held accountable for committing crimes against humanity.

Here in the United States, Congress can take measures as well. In early February, Rep. Ed Royce (R-Calif.) and Rep. Eliot Engel (D-N.Y.) introduced the bipartisan North Korea Sanctions Enforcement Act. Unlike prior legislation, this bill has an important human rights focus that came about as a response to the U.N. inquiry.

This legislation would make it so that the U.S. directly sanctions North Korea—not just for its nuclear weapons proliferation, but also for the regime’s ongoing human rights abuses, according to Enos.

This would ensure that the sanctions impact not the suffering North Koreans, but rather the regime itself.

“It is past time to hold Pyongyang’s elites responsible for their actions,” Engel said in a press release. “This bipartisan legislation would strengthen U.S. sanctions and close loopholes used by the Kim regime to profit from illicit activities.”

Lee has some ideas of her own for policy changes that could benefit North Koreans.

As it stands now, Chinese policy is to forcibly repatriate any North Korean defectors they catch, releasing the refugees back into the hands of the aggressor nation. Upon returning, the defectors face harsh punishment in the kwanliso—torture, starvation, execution—as do their families. This is the biggest problem for defectors, Lee explained.

China is the only path to South Korea, where defectors are granted automatic citizenship due to their asylum status. Throughout their escape journey to South Korea, North Koreans fear for their safety in China, the possibility of being sent back to a wretched life always looming.

“Please don’t catch them,” Lee pleaded to the Chinese government while speaking at an event Wednesday at The Heritage Foundation.

“They don’t want to stay in China; they want to come to South Korea for asylum. I don’t ask for [China] to give ID cards or citizenship, it’s too much for them. At least stop trying to catch them,” she begged.

No matter how the world chooses to combat this humanitarian crisis, North Korean defectors and policy experts alike advocate for an urgent and effective response from the international community.

Bruce Klingner, senior research fellow on Northeast Asia in the Asian Studies Center at the Heritage Foundation, urged the world to stand up to the Kim regime in an issue brief last year, writing that there “should be widespread international outrage against the horrors systemically perpetuated on the North Korean people by their leaders.”

“Time is running out for the North Korean people, but too many have already perished as the world turned its back,” Klingner warned.