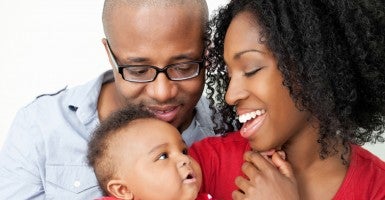 Research shows that kids benefit from having a dad and mom, not just two parents. (Photo: Tanya Constantine Blend Images/Newscom)

Recently at Forbes, John Farrell published an odd critique of an essay of mine that ran at First Things. The essay is an excerpt from my new book, “Truth Overruled: The Future of Marriage and Religious Freedom.” In the book, I argue on the basis of philosophy, social science and public policy that the judicial redefinition of marriage will have negative consequences for our country. In the last chapter I place this debate over the nature of marriage and human sexuality into a larger discussion, one of philosophical and theological anthropology.

Farrell criticizes this for being too religious and for not being scientific enough: “[I]f there’s one thing the article doesn’t discuss at all, it’s … anthropology: The science of anthropology as it would be understood by practitioners of the wide-ranging discipline.” Farrell might want to reconsider his scientism. After all, philosophical and theological anthropology predate the practice of scientific anthropology by millennia. And, in fact, the most important anthropological truths—that all men are created equal and endowed by their creator with inalienable rights—aren’t “scientific” at all.

Nevertheless, had Farrell looked to the book from which the First Things essay was drawn, he would have found ample scientific evidence to support the conclusion that marriage policy should reflect the truth that marriage is the union of man and woman. Part of that argument hinges on the reality that there is no such thing as “parenting.” There is mothering, and there is fathering, and children do best with both. This is an argument about human anthropology if ever there were.

Other disciplines provide insights, too. In a summary of the “best psychological, sociological, and biological research to date,” Brad Wilcox, a sociologist at the University of Virginia, finds that “men and women bring different gifts to the parenting enterprise, that children benefit from having parents with distinct parenting styles, and that family breakdown poses a serious threat to children and to the societies in which they live.”

Wilcox finds that “most fathers and mothers possess sex-specific talents related to parenting, and societies should organize parenting and work roles to take advantage of the way in which these talents tend to be distributed in sex-specific ways.” These differences are not the result of gender roles or sex stereotypes. They are a matter of what comes naturally to moms and dads, what moms and dads enjoy doing with their children.

As I explain in “Truth Overruled,” dads play important roles in the formation of both their sons and their daughters. As the sociologist David Popenoe of Rutgers University explains, “[t]he burden of social science evidence supports the idea that gender-differentiated parenting is important for human development and that the contribution of fathers to childrearing is unique and irreplaceable.”  Popenoe concludes:

What are the distinctive gifts of mothers and fathers? Wilcox reports, “Among the many distinctive talents that mothers bring to the parenting enterprise, three stand out: their capacity to breastfeed, their ability to understand infants and children, and their ability to offer nurture and comfort to their children.” And fathers, Wilcox writes, “excel when it comes to discipline, play, and challenging their children to embrace life’s challenges.”

Children of each sex, moreover, benefit from the distinct and complementary attention of a mother and father. Consider what dads do for their sons and daughters.

Fathers tend to be the ones who engage in what sociologists call “rough and tumble play”—teaching their boys that it’s all right to put people in headlocks but not to bite, pull hair or gouge eyes. Fathers help their boys channel their distinctively masculine tendencies into productive activities. When this doesn’t happen, social costs run high. Wilcox writes, “[C]riminals come from broken homes at a disproportionate rate: 70 percent of juveniles in state reform schools, 72 percent of adolescent murderers, and 60 percent of rapists grew up in fatherless homes.” Fathers matter for their boys.

Social science confirms the importance of marriage for children. According to the best available sociological evidence, children fare best according to virtually every indicator examined when reared by their wedded biological parents. Studies that control for other factors, including poverty and even genetics, suggest that children reared in intact homes do best in measurements of educational achievement, emotional health, familial and sexual development and delinquency and incarceration.

. . . [R]esearch clearly demonstrates that family structure matters for children, and the family structure that helps children the most is a family headed by two biological parents in a low-conflict marriage. Children in single-parent families, children born to unmarried mothers, and children in stepfamilies or cohabiting relationships face higher risks of poor outcomes. . . . There is thus value for children in promoting strong, stable marriages between biological parents.

Marriage benefits everyone because separating childbearing and childrearing from marriage burdens innocent bystanders—not just children, but the whole community. When parents are unable to care for their children, someone has to step in, and that “someone” is often the state. By encouraging the marriage norms of monogamy, sexual exclusivity and permanence, the state strengthens civil society and reduces its own role.

So, yes, anthropology matters. It’s studied both philosophically and empirically. And it’s not simply a historical matter—it manifests itself in our daily lives. And the sociological evidence presented here, and in my new book, shows why marriage as the union of husband and wife matters.