The So-Called Republican Majority Is Advancing Only Washington’s Priorities 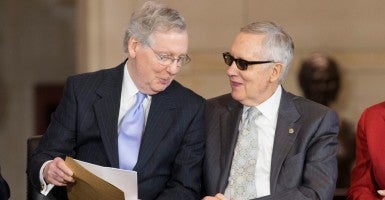 Senate leadership consists of the Mitch McConnell-Harry Reid leadership team. They operate as a team. They support the same priorities.

What we saw in the Senate on Sunday is unprecedented in the annals of Senate history. It consisted of the majority leader and the minority leader denying members the ability to have votes on their amendments and indeed the ability even to have a roll-call vote. The denial of a second for a vote, which was aggressively whipped by the Republican majority, is an extraordinary measure designed to gag senators and enforce the will of the McConnell-Reid leadership team.

Make no mistake, granting a sufficient second for a roll call vote is done customarily in the Senate. Denying it is extraordinary, and it is done as a consequence of McConnell’s being afraid for his members to be on record on this issue.

We then, subsequently, saw Sen. Mike Lee of Utah bring up his amendment to defund Planned Parenthood. We have seen in recent weeks gruesome videos of senior officials of Planned Parenthood discussing the selling of body parts of unborn children. These videos are horrifying, and yet it saddens me greatly that the Republican leader led the effort to continue the taxpayer funding of Planned Parenthood.

Make no mistake, when the majority leader whipped Republicans to vote alongside Democrats, it was no surprise that Democrats did not want to vote on that because Democrats in this chamber do not purport to support the right to life. But to see the so-called Republican leadership whip against allowing a vote to defund Planned Parenthood—it has the virtue of clarity. It makes clear that the McConnell-Reid leadership team is united in favor of big government spending and debt and power.

To the millions of Americans who rallied in November believing if only we got a Republican majority in the Senate something would be different, this was a clarifying and a sad moment.