Why Does Obama Trust Iran? 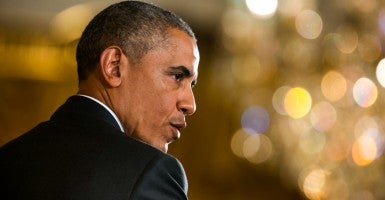 Why does Obama think Iran will play fairly on this deal? (Photo: Jim Lo Scalz0/EPA/Newscom)

President Obama has always said he was a man of faith. The nuclear deal with Iran proves it.

The Vienna agreement is built solely on faith in the Islamic Republic of Iran’s leaders, and their willingness to play along with Obama’s grab for a foreign affairs legacy. This is foolishness of a potentially catastrophic order. God deserves faith; the ayatollahs do not.

The agreement’s first article of faith is this agreement will not kick off a new arms race in the Middle East. Mr. Obama somehow believes that Iran’s neighbors harbor little fear of the regime’s destabilizing activities and trust its motives in signing the pact. But fear and mistrust of the regime are palpable throughout the region. Iran’s anxious neighbors will surely seek their own capability to deter or strike back at a nuclear Iran.

The only thing that can forestall that development is if America’s Middle Eastern allies and friends regain their confidence that they will be shielded by America’s nuclear umbrella. That faith has been lost, by an administration that has seemed far more willing to browbeat and threaten America’s long-time allies (Turkey, Saudi Arabia, Jordan, etc.) than Iran, a country whose real leader regularly led chats of “Death to America” throughout the negotiations.

The second article of faith is that the Iranian government will compartmentalize their support for terrorism, keeping it separate from their nuclear programs. Secretary of State John Kerry and Obama have insisted that there’s no need for the agreement to address terrorism or hostages—just nukes! Apparently we are to believe that the $150-billion-plus windfall Tehran gets from the pact will go to pave roads and build schools.

Far more likely that the first budget request to be filled will come from the Revolutionary Guard Quds Force, a group who can only be compared to the Soviet Union’s Spetznaz commandos. This group attempted to assassinate a Saudi ambassador right here in Washington, D.C. They lead radical Shia militias across Iraq (and supplied those same groups with advanced IEDs that killed Americans). They arm and equip Hezbollah and Hamas against Israel. They have fomented a Shia rebellion in Yemen, and directly support Bashir al Assad in Syria. When an outfit like that stands to benefit from the deal, you can’t claim terrorism is off the table.

Originally published in The Daily Caller.