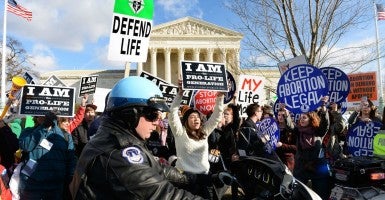 Pro-life and pro-choice activists meet in front of the US Supreme Court in Washington, DC, January 22, 2015. Tens of thousands of Americans who oppose abortion are in Washington for the annual March for Life, marking the 42nd anniversary of the Supreme Court's Roe v. Wade decision. (Photo: Abaca Press/Sipa USA/Newscom)

Though the state has been ordered to not enforce the law, the appeals court strongly signaled that the Supreme Court should revisit its abortion precedents, including Roe v. Wade.

Passed in 2013, North Dakota’s H.B. 1456 makes it a felony for a physician to perform an abortion once the unborn baby’s heartbeat is detected, except in cases of medical emergencies.

An unborn baby’s heartbeat is detectable at about 6-7 weeks. Under current Supreme Court jurisprudence, states may not prohibit women from having an abortion before the unborn baby is “viable”—when the baby is capable of living outside the womb (with or without medical assistance).

At the time Roe v. Wade was decided in 1973, a baby was considered viable after the second trimester (27-28 weeks), whereas today, babies generally are viable at 24 weeks—and sometimes even earlier.

The New England Journal of Medicine put out a study earlier this year documenting successful cases of babies born at 22 weeks gestation.

In Roe v. Wade, the Supreme Court used the trimester framework to determine, at what point during a pregnancy, the government’s interest in protecting the unborn child outweighed a woman’s ability to terminate her pregnancy.

The Court added to this framework in Planned Parenthood v. Casey (1992), determining that states may not pass regulations before viability that have the “purpose or effect of placing a substantial burden in the path of a woman seeking an abortion.”

But in 2007 with Gonzalez v. Carhartthe Court determined that such regulations are subject only to rational basis review—the lowest standard of review—which requires that a law be rationally related to a legitimate state interest.

The Eighth Circuit panel affirmed the Bismarck district court ruling, but noted there are “good reasons” for the Supreme Court to reconsider its abortion jurisprudence. The panel wrote:

Accordingly, this means whether an unborn baby may be protected by the state depends on the year and current state of medicine, which is untenable as a legal standard.

The panel stated that this is a matter “better left to the states, which might find their interest in protecting unborn children better served by a more consistent and certain marker than viability.”

The Eighth Circuit panel concluded, “To substitute its own preference to that of the legislature in this area is not the proper role of a court.”

Indeed, the Supreme Court’s abortion cases prevent states from passing reforms reflecting the “advances in medical and scientific technology [that] have greatly expanded our knowledge of prenatal life.” The panel also pointed out that the Supreme Court has not taken into account the physical and emotional toll of abortions, as Norma McCorvey (“Jane Roe” in Roe v. Wade) and others have revealed.

Neither has the Court considered the sad realities of the abortion industry, from Philadelphia abortionist Kermit Gosnell’s “house of horrors” to the recent allegations of Planned Parenthood’s alleged harvesting and sale of parts from aborted unborn babies.

But the justices should heed the panel’s advice and revisit their deleterious abortion jurisprudence.