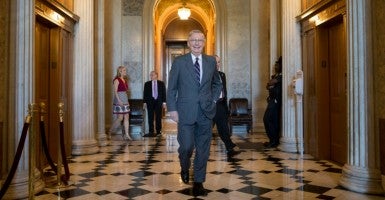 The Senate on Sunday will stay overtime to consider two controversial amendments to a highway funding bill, voting on measures to repeal Obamacare and revive the Export-Import Bank.

On Friday morning, Senate Majority Leader Mitch McConnell, R-Ky., announced he would allow the two amendments to proceed as attachments to a “must-pass” bill to address the expiring Highway Trust Fund.

In a statement, Sen. McConnell said the “balanced proposal” will allow the Senate to consider two “long-sought” amendments.

“I know we’ll engage in a robust debate on these issues. We should. And then, we’ll take a vote.”

The majority leader’s decision was met with both criticism and praise from his colleagues.

Democrats applauded Senate leadership for allowing a vote to reauthorize Ex-Im bank, an agency that provides taxpayer-backed loans and loan guarantees to foreign countries and companies.

I commend @SenateMajLdr for setting up a vote to reauthorize the Export-Import Bank. This bill is critically important for U.S. businesses.

The Ex-Im Bank’s charter expired on June 30th, after a conservative-led push against the agency.

However some Republicans have accused McConnell of betraying them by allowing a vote on Ex-Im.

We need to ask ourselves if this is why we are in the majority: To make deals with Democrats to reauthorize cronyism & pass a spending bill

During a fiery speech on the Senate floor, Sen. Ted Cruz, R-Texas, accused the majority leader of negotiating a backroom deal with Democrats to allow a vote on the bank.

The Senate, based on a test last month that showed 65 senators would support the bank, is likely to vote to reauthorize it, although it’s unclear if House Speaker John Boehner will accept a vote in his chamber.

Meanwhile, McConnell’s move to allow an Obamacare vote — seen as an appeasement to conservatives upset over Ex-Im — will likely fail because it won’t have the support to overcome the 60-vote threshold. However, Sen. Mike Lee, R-Utah, suggested Republicans might get a second chance to vote on repealing Obamacare later in the week when it would need just 51 votes.

Lee sees this as an opportunity to fulfill a Republican election promise.

“Republicans now have an opportunity to make good on our promise to repeal Obamacare,” Lee said in a statement. “I look forward to voting to repeal Obamacare with all 54 of my Republican colleagues Sunday and working with all of the Senate to finally bring real reform to our health care system.”