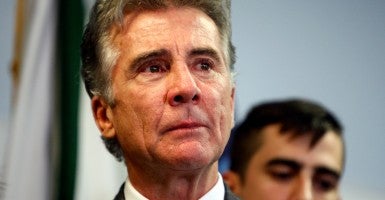 The murder of Kate Steinle in San Francisco by a seven-time felon and five-time deportee has sparked a nationwide debate about sanctuary cities and immigration policy.

We recently learned that in one eight-month period in 2014, more than 8,100 deportable aliens were released by sanctuary jurisdictions. Of those, three thousand were felons and 62 percent had a prior criminal record. Nineteen hundred were later rearrested a total of 4,300 times on 7,500 different offenses.

But this debate over sanctuary policies has brought attention to another horrifying result of the federal government’s refusal to enforce our immigration law: the failure to deport convicted illegal alien sex offenders.

Last month, the Boston Globe reported that U.S. Immigration and Customs Enforcement (ICE) released from custody a large number of illegal criminal aliens who had previously been convicted of sex crimes, without closely tracking their movements or forcing them to register in the state where they were released on the National Sex Offender Public Registry (NSOPR).

The Globe reported that of these illegal alien sex offenders who were ordered deported, some of their home countries refused to take them back. When that is the case, according to the Globe, “ICE says they must release them after six months because the Supreme Court in 2001 barred the agency from holding immigrants indefinitely,” even if they are violent sex offenders. The case is Zadvydas v. Davis, in which the Court ruled that indefinite detention of removable aliens is impermissible, and that instead an alien may be detained only for “a period reasonably necessary to bring about that alien’s removal from the United States.”

SORNA is a controversial statute, and though it cannot prevent recidivism in all cases, it is “a practical, workable, and effective piece of legislation that assists law enforcement and the general public alike who desire to keep themselves and their children safe from dangerous sexual predators,” according to a 2012 essay by The Heritage Foundation’s John Malcolm. But the Globe reported that immigration officials have released “convicted rapists, child molesters, and kidnappers…without making sure they register with local authorities as sex offenders.”

Immigration officials tried to deport Luis-Leyva Vargas, 47, to Cuba after he served three years in a Florida prison for unlawful sex with a teen. In 2008, officials released him. Two years later, he kidnapped an 18-year-old in Rockingham County, Va., at knifepoint and raped her. Now he is serving a 55-year prison sentence.

Felix Rodriguez, a 67-year-old sex offender convicted of raping children as young as 4 in the 1990s, was freed in 2009, also because Cuba would not take him back. Months later, he fatally shot his girlfriend in Kansas City. He pleaded guilty and is serving 10 years in a Missouri prison.

Andrew Rui Stanley, convicted in 2000 of multiple counts of sodomizing a child when Stanley was 14, was released in 2009 after Brazil failed to provide a passport needed to send him home. For the next two years, he viciously abused three children in St. Louis and now, at age 31, will be in prison for the rest of his life.

Former Ambassador Terry Miller, director of the Center for Data Analysis and the Center for Trade and Economics at The Heritage Foundation and who has had a long and distinguished diplomatic career, says that while many home countries might initially balk at a low level request to repatriate such criminals, he doubts they would continue to resist high-level requests from State Department leadership or the White House.

And even in those cases, there are many different types of pressure the State Department and the White House could exert on these countries during the course of our ongoing relations on issues ranging from trade to military and financial assistance.

But there is no evidence that the Obama administration has actually brought any White House-directed, high-level diplomatic pressure against the home countries that refuse to take back such criminals. The administration obviously did not make taking back criminals like Luis-Leyva Vargas or Felix Rodriguez one of the conditions of its recent opening of diplomatic relations with Cuba.

SORNA is also known as the Adam Walsh Child Protection Act, named for 6-year old Adam Walsh, who in 1981 was abducted and murdered. Adam’s father, John Walsh, became the host of the national television program ‘America’s Most Wanted.’ Following Kate Steinle’s murder, John Walsh appeared on CNN to discuss the NSOPR, which he notes is not effectively enforced against illegal immigrant sex offenders. “You’re able to find out…if a convicted American felon sex offender is living next door,” he says. “But not an illegal immigrant.”

Under the terms of the statute, which defines “sex offender” as “an individual who was convicted of a sex offense,” illegal immigrants convicted of sex offenses are included in the category of people forced to register.  But Walsh points out that immigration officials have failed to make sure this occurs. They often release detainees from custody in a different locality from where they were first picked up – but local law enforcement is not always informed that federal agents have brought a convicted sex offender into the community.

As has also been pointed out, including by Laura Rogers, the former director of the Justice Department’s Office of Sex Offender, Sentencing, Monitoring, Apprehending, Registering, and Tracking (SMART) office, which is responsible for implementing SORNA, there has been a “vocal liberal chorus of opponents to the Adam Walsh Act” who have worked behind the scenes to weaken the law.

These recent developments in the immigration debate pinpoint the failure of the Obama administration’s immigration policy. In 2010, the Department of Homeland Security established the Priority Enforcement Program, which is supposed to focus “on convicted criminals and others who pose a danger to public safety.” But while the Obama administration claims to be focused on deporting those illegal immigrants who pose the greatest threat to society, convicted felons and sex offenders remain within our borders.

By failing to deport these criminals or at the very least require registration and provide notice to local communities about their presence, the administration is endangering the American public and facilitating the victimization of innocent children.