How the Media Are Promoting Polyamory: The New ‘Marriage Equality’? 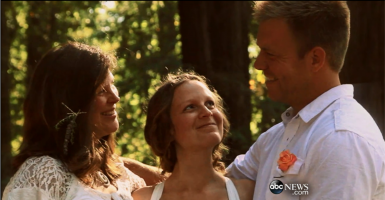 The video (which you should watch at your own discretion, it includes discussions of three-way sex) profiles a self-described “triad” or “throuple”—a three-person couple.

It discusses their desire for marriage equality.

After all, now that the Supreme Court has declared marriage must be redefined to include so-called “marriage equality” for same-sex couples, why not for throuples?

There is, in fact, a long history of such arguments, as I explain in my new book, “Truth Overruled: The Future of Marriage and Religious Freedom.”

Before the Supreme Court’s ruling, Professor Judith Stacey of New York University expressed hope that redefining marriage would give marriage “varied, creative, and adaptive contours,” leading some to “question the dyadic limitations of Western marriage and seek . . . small group marriages.”

She supports “minimal marriage,” in which “individuals can have legal marital relationships with more than one person, reciprocally or asymmetrically, themselves determining the sex and number of parties, the type of relationship involved, and which rights and responsibilities to exchange with each.”

In 2009, Newsweek reported that the United States already had over five hundred thousand polyamorous households, concluding that:

perhaps the practice is more natural than we think: a response to the challenges of monogamous relationships, whose shortcomings . . . are clear. Everyone in a relationship wrestles at some point with an eternal question: can one person really satisfy every need? Polyamorists think the answer is obvious—and that it’s only a matter of time before the monogamous world sees there’s more than one way to live and love.

As I explain in “Truth Overruled,” now that the court has eliminated sexual complementarity as an essential characteristic of marriage, no principle limits civil marriage to monogamous couples. And in fact the legal challenges to monogamy have already begun.

A federal judge in Utah has allowed a legal challenge to anti-bigamy laws. A bill that would allow a child to have three legal parents passed both houses of the California state legislature in 2012 before it was vetoed by the governor, who claimed he wanted “to take more time to consider all of the implications of this change.”

Justice Samuel Alito voiced concerns about the norm of monogamy during oral arguments in the Obergefell case.

If “equality” requires redefining marriage to include same-sex couples, what else does “equality” require? If the fundamental right to marry is simply about consenting adult romance and caregiving, what limits could the state ever place on it?

Justice Alito posed the hypothetical of “a group consisting of two men and two women apply[ing] for a marriage license” and asked, “Would there be any ground for denying them a license?” Pursuing this line of thought further, he asked about other types of couples. How about siblings?

They’ve lived together for twenty-five years. Their financial relationship is the same as the same-sex couple. They share household expenses and household chores in the same way. They care for each other in the same way. Is there any reason why the law should treat the two groups differently?

It was a good question, and one that the lawyers to whom it was directed could not answer. Nor could the court.

As I show in chapter 3 of “Truth Overruled,” Chief Justice Roberts points out that every argument the court made to redefine marriage to include same-sex couples could be used to redefine it to include multi-person relationships:

“Although the majority randomly inserts the adjective ‘two’ in various places, it offers no reason at all why the two-person element of the core definition of marriage may be preserved while the man-woman element may not.”

“It is striking how much of the majority’s reasoning would apply with equal force to the claim of a fundamental right to plural marriage.”

Not once did the court explain why marriage was limited to twosomes once they got rid of male-female complementarity.

The same week as oral arguments, the London Telegraph reported that the British “Green Party is ‘open’ to the idea of three-person marriages.”

Indeed, a party leader said “she was ‘open to further conversation and consultation’ about the prospect of the state recognising polyamorous relationships.” The issue came up precisely because a constituent had asked about “marriage equality” for threesomes:

At present those in a “trio” (a three-way relationship) are denied marriage equality, and as a result face a considerable amount of legal discrimination. As someone living with his two boyfriends in a stable long-term relationship, I would like to know what your stance is on polyamory rights. Is there room for Green support on group civil partnerships or marriages?

Will there be room for such support in America’s political parties?

In the month leading up to the Obergefell ruling, the Emory Law Journal published a symposium exploring the constitutional right to polygamy. And in the spring of 2015, the Cambridge University Press published “In Defense of Plural Marriage,” promising that the author, a political scientist in California, shows “how the constitutional arguments that support the option of plural marriage are stronger than those against.”

The day that the Supreme Court redefined marriage everywhere, Politico magazine ran an essay titled: “It’s Time to Legalize Polygamy: Why Group Marriage Is the Next Horizon of Social Liberalism.” These are mainstream publications.

But if you suspect that all this talk about polygamy and polyamory is just conservative scaremongering, consider that the advocates of same-sex marriage have been enthusiastically exploring new family forms.

The liberal online magazine Salon in August 2013 posted a woman’s account of her shared life with a husband, boyfriend, and daughter under the headline “My Two Husbands.” The subhead: “Everyone wants to know how my polyamorous family works. You’d be surprised how normal we really are.”

These adventurers even coined the word “throuple” to denote one of the new domestic arrangements. New York magazine profiled one such group:

Their throuplehood is more or less a permanent domestic arrangement. The three men work together, raise dogs together, sleep together, miss one another, collect art together, travel together, bring each other glasses of water, and, in general, exemplify a modern, adult relationship. Except that there are three of them.

Are those inclined to such relationships being treated unjustly when their consensual romantic bonds go unrecognized?

Are their children unconscionably “stigmatized”? We have just witnessed a successful lawsuit demanding “marriage equality” for same-sex couples. But on what basis could the court deny marriage equality to same-sex throuples? Or mixed-sex quartets?

As I argue at great length in “Truth Overruled,” monogamy’s privileged place in Western law and culture was based on the belief that the one man and the one woman who unite in the comprehensive act that produces a child should form a stable family.

But if the male-female nature of marriage is utterly arbitrary, what’s so special about the number two? What is the principled reason for denying “marriage equality” to threes and fours and more?