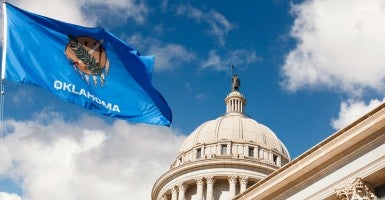 State Capitol Building in Oklahoma City with US state flags outside (Photo: istockphoto)

A recent report out of Oklahoma makes clear the startling consequences of a lack of transparency and oversight within law enforcement.

Last week, a review of Oklahoma audits from 2007 to 2014 brought to light disturbing incidents and major discrepancies in the state’s civil forfeiture operations. Civil forfeiture is a law enforcement tool that enables the seizure of property, which police and prosecutors suspect has been involved in, or is the result of, criminal activity.

It was ramped up three decades ago to combat a wave of drug-related crime, and its main purpose—to target the assets of drug kingpins and their money launderers—was clear and limited.

Now, however, forfeiture is used with alarming frequency against ordinary Americans who risk losing their homes and life savings despite never even being charged with a crime.

Here are several startling examples of forfeiture abuse in Oklahoma:

In most states and at the federal level, innocent people who want to fight for their property face a tortuous and costly legal process that forces them to prove their own innocence.

And if they lose, the agencies that conducted the initial seizures usually keep the bulk of the proceeds from the forfeited property. That money can then end up being spent on virtually anything, from office parties to armored personnel carriers, with alarmingly little accountability or oversight.

Rules governing the use of forfeiture funds at the federal level and in most states ostensibly limit their use to “law enforcement purposes,” but a series of recent revelations calls into question just how limiting those rules are.

In Texas, several district attorneys used forfeiture funds to pay for trips to Hawaii and visits to casinos.

In Oklahoma, forfeiture funds are retained by law enforcement agencies and are supposed to be spent for the enforcement of drug laws and for drug abuse and prevention programs.

While some of these incidents may be chalked up to sloppy and inconsistent record keeping, others are clearly deliberate misuses of forfeited funds and property.

Why does it take so long for these stories to come to light? Forfeiture operations nationwide are largely opaque.

With few reporting requirements and little oversight, major abuses can be swept under the rug, avoiding public scrutiny for years. Some, no doubt, never become public.

Any system which allows for the seizure of private property under the color of the law, and then allows for that property to be retained by the agency that seized it, deserves close and continuous scrutiny by public officials.

Agencies should be required to thoroughly document their forfeiture activities, including what they seize, whether the property was returned or forfeited and how any resultant forfeiture funds have been spent. These records should be readily and publicly available and should be routinely reviewed and regularly audited.

In addition to greater transparency, The Heritage Foundation has outlined a series of reforms to forfeiture laws in Arresting Your Property, a new report on asset forfeiture.

Loveless’s bill would require a criminal conviction before civil forfeiture cases can proceed and would redirect all forfeiture proceeds to the state treasury.

Oklahoma is now joining more than 20 other states actively considering changes to their asset forfeiture laws.