Meet 7 Dangerous Iranians Who Will No Longer Be Sanctioned 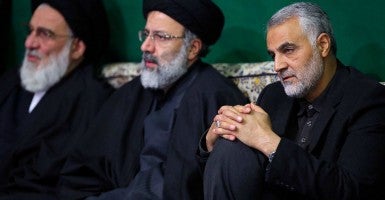 Qassem Suleimani, Major General the Commander of the Quds Force in the Iranian Army of the Guardians of the Islamic Revolution at compound of Ayatollah Ali Khamenei, the Supreme Leader of Iran. (Photo: AY-COLLECTION/SIPA/Newscom)

Iran has a long history of supporting violence and terrorism within the Middle East, as well as around the world.

The following list is a small sample of some of the most dangerous Iranians who will no longer be sanctioned through the implementation of the Iran deal (Joint Comprehensive Plan of Action).

Qasem Soleimani is a high-ranking general in the Iranian Islamic Revolutionary Guard Corps (a branch of the Iranian armed forces).

Soleimani is responsible for Iran’s terror operations abroad. He was sanctioned by the U.S. in 2011 for heading up an attempted terrorist plot to assassinate the Saudi Ambassador to the U.S. while he was visiting America.

In 2004, he and those under his command flooded Iraq with lethal copper-tipped improvised explosive devices. These high-powered devices took the lives of over 500 American soldiers and Marines.

While serving in the Iranian Islamic Revolutionary Guard Corps in the 1970s and 1980s, Najjar trained and commanded Hezbollah fighters in Lebanon at the time of the Beirut barracks bombing. This attack claimed the lives of 241 U.S. Marines, sailors, and soldiers.

Najjar currently serves as the Minister of the Interior, and was responsible for the brutal quelling of protests in 2009, where at least 37 Iranians were killed and hundreds more imprisoned without cause or trial in torturous conditions.

Ahmad Vahidi served as Iran’s Minister of Defense from 2009-2013. In the early 1990s he was the commander of the Quds force, a special unit of the Iranian Islamic Revolutionary Guard Corps.

During this time he spearheaded the 1994 bombing of a seven-story Jewish community center in Buenos Aires, Argentina, which claimed the lives of 85 people.

He has had an Interpol warrant out for his arrest since 2007.

Hossein Salami is the current second-in-command of the Iranian Islamic Revolutionary Guard Corps. Salami recently had threatening words for the United States by claiming Iran would welcome war with America. In addition to this he has recently touted the growth of the Iranian Military:

“The expansion of Iran’s military power has raced up and is now making progress at a high speed, meaning that today, we are able to hit all the vital interests of the enemies at any point in the region.”

In a recent interview, he boasted of Iran’s continued support for violent and destabilizing organizations, such as Hezbollah in Lebanon, the Palestinians, and Assad in Syria:

“The Islamic Republic of Iran has helped Iraq, Syria, Palestine and the Lebanese Hezbollah by exporting the technology that it has for the production of missiles and other equipment, and they can now stand against the Zionist regime, the ISIL and other Takfiri groups and cripple them.”

Hajizadeh also threatened a response of “hot bullets” if any Western power ever attempted inspection of Iran’s nuclear facilities.

The commander of Iran’s Basij paramilitary and moral police force, Naqdi made headlines when he recently declared that Israel’s destruction is “nonnegotiable.”

In 2014, Naqdi said Iran was arming Palestinians in their fight against Israel, saying the move would lead to Israel’s destruction.

Basij forces have also participated in the brutal regime crackdowns on street protests.

While currently imprisoned in Africa until approximately 2016, Aghajani is a member of the Iranian Islamic Revolutionary Guard Corps, and was arrested in Nigeria in 2011.

He was charged with smuggling 240 tons of weapons – including rockets, grenades, mortar shells, and ammunition – in 13 shipping containers through a Nigerian port, bound for insurgencies elsewhere in Africa.

Because of their unrepentant support of terrorist groups, Iran is barred from shipping weapons to any location abroad, and operatives like Aghajani are the means to this end.