Charlie Hebdo Will No Longer Publish Images of the Prophet Muhammad. Here’s Why. 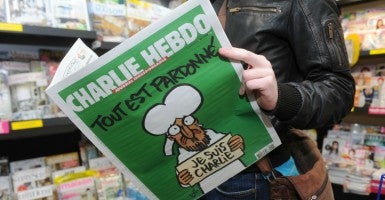 French satirical magazine Charlie Hebdo will no longer publish depictions of the Prophet Muhammad, according to editor Laurent Sourisseau.

Sourisseau told German magazine Stern, as reported by Deutsche Welle, that Charlie Hebdo has “done its job” in promoting free speech and has already successfully “defended the right to caricature.”

This announcement comes six months after Charlie Hebdo headquarters was violently attacked by terrorists, resulting in the deaths of 12 people at the magazine.

The perpetrators of the terror attack were two Islamic militants with ties to extremist groups. Al-Qaeda in Yemen took responsibility for the attack.

The extremists cited the magazine’s publishing of images of the prophet as the reason for the murders. In Islam, it is considered blasphemous to draw pictures or representations of Muhammad.

Charlie Hebdo responded to the January attacks by featuring another image of Muhammad on the cover of the next publication they released. A sign above the Prophet’s head read “Tout est pardonné” or “All is forgiven.”

“We have drawn Muhammad to defend the principle that one can draw whatever they want,” Sourisseau explained to Stern.

“It is a bit strange though: We are expected to exercise a freedom of expression that no one dares to,” he added.

Since the January attacks, Charlie Hebdo has appeared to soften its position about publishing depictions of Muhammad. However, Sourisseau insisted that this new decision has nothing to do with the violent terrorist attacks.

“We still believe that we have the right to criticize all religions,” Sourisseau said.

The editor clarified that he did not want people to begin thinking that the publication is “possessed by Islam.”

“The mistakes you could blame Islam for can be found in other religions,” Sourisseau said.

Although Charlie Hebdo will no longer publish images of Muhammad, this does not mean that they will leave Islam alone entirely.

The satirical team reserves the right to prod at Islam in the same way they do any other faith.