Inside Ukraine’s Grassroots Fight for Democracy 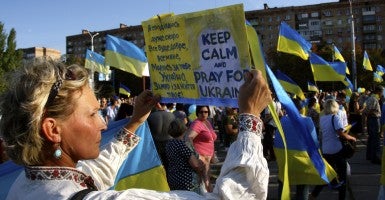 A pro-Ukraine rally in Mariupol prior to the Sept. 5, 2014 cease-fire. (Photo: Nolan Peterson/The Daily Signal)

MARIUPOL, Ukraine—In a stuffy basement a block off Prospekt Lenina (Mariupol’s main street, which is named after Vladimir Lenin), about 30 Mariupol residents recently gathered for a lesson in democracy.

It was raining and thundering outside. And, like during most storms in Mariupol since the war began in spring 2014, it wasn’t immediately clear if the sounds of thunder were from the storm or from fighting on the front lines in Shyrokyne—only a 20-minute car ride away.

“Democracy is not a perfect thing,” said Maksim Borodin, a computer repairman and one of the leaders of the pro-democracy group called “Together,” which had organized the meeting. The audience fanned themselves to keep cool in the hot, humid basement as he spoke.

“But we have to learn the government is not the authority,” he added. “They are our servants.” The mission of Together (which has about 80 total members) is to teach Mariupol’s residents about the norms of democratic culture, such as freedom of information and the belief that government works for its citizens, not the other way around. The group also teaches citizens not to tolerate bribery and corruption, or thuggish tactics of coercion meant to silence political opposition—all hallmarks of Ukraine’s post-Soviet democracy.

“Mariupol is caught between the past and the future,” said Peter Andrushchenko, one of the group’s leaders, speaking to the audience.

“The city council site must be open and accessible by all,” he added. “When we control the local government, we control our own money. So we have a right to control these activities.”

Many citizens in Mariupol have been dissuaded from participating in their country’s political process due to 70 years of Soviet rule and a 25-year span of corrupt oligarchies—intermittently interrupted by revolutions in Kyiv. The lesson learned by many is referred to as the “ostrich mentality”—keep your head down and out of trouble; it’s not worth being singled out trying to effect change that most likely won’t succeed.

“Many of Ukraine’s civic laws and local governments still operate under the rules and along the lines of the Soviet days,” Borodin said. “And people are afraid to speak out against their politicians.”

Additionally, the failed promise of democracy to improve living conditions has spurred some residents to retain pro-Russian sympathies out of nostalgia for the Soviet era, when pensions and politics were perceived to be more stable.

“Almost all of our parents have pro-Russian views,” said Igor Peftiyev, 30, an insurance broker. “They’ve seen enough. They faced political crisis two or three times, and the devaluation of the currency. They’ve seen the revolutions, and they’ve seen how everything changed for the worse.”

“How can you control the authorities?” one old man in the crowd yelled. He had a gray beard and wore a flat cap. “You are ambitious young people, but you won’t be able to change anything.”

Among Mariupol’s millennials, opinion is also split about the likelihood of reform. Some claim the younger generations, for whom the Soviet Union is a secondhand memory, are more exposed to the West through social media and the Internet and will consequently demand changes that their parents and grandparents have been reluctant to pursue.

“Our parents grew up in the USSR,” said Katerina Altunina, 19. “But we never got used to the Soviet Union, and never had to stay silent and be afraid of the regime.”

Others, however, say the inescapable threat of war has stifled progress, spurring the prioritization of personal security over pushing for political reforms.

“When you are safe, you can have an opinion,” said Serhiy Zubrev, 30, an engineer. “We are living in a circle, nothing has changed.”

In August 2014, as separatist attacks ramped up on the outskirts of Mariupol prior to the first cease-fire on Sept. 5, the civic group New Mariupol organized a human chain on the outskirts of the city as a symbolic call to end the war. The event drew more than a thousand people, highlighting what the group’s leaders say is a new trend of civic participation in Mariupol that did not exist prior to the conflict.

“Mariupol is not a city where people go out and go to meetings; it was unusual to have that kind of civil society reaction,” said Ivan Syniepalov, a spokesman for New Mariupol. “Civil society in Mariupol started to form that day.” “We want our children to grow up in a Ukrainian environment, not Russian or Soviet,” Syniepalov said.

The 2014 revolution also spurred a volunteer activism awakening across the country. Numerous anti-corruption and reform-focused civic groups have formed, as well as volunteer groups that collect and transport equipment and supplies to soldiers on the front lines, and civilian volunteer battalions—formed out of protest groups active in the Maidan—that still actively fight in the Donbas.

“Civic groups like ours are a victory of the Maidan,” Andrushchenko said, referring to the 2014 revolution. Yet, across the country, local governments remain largely unchanged, still comprising officials elected before the revolution. Outside of Kyiv, many citizens’ lives have not been positively affected by the 2014 revolution. The war in the Donbas has killed more than 7,000 Ukrainian soldiers and civilians and has displaced almost 2 million people. And an economic crisis has collapsed the country’s currency—consumer price inflation is forecast to end 2015 at 30 percent—and led to a sharp decline in GDP.

“There is a feeling in Ukraine like nothing changed for the better,” said Hennadiy Korban, 55, in an interview with The Daily Signal from his Dnipropetrovsk offices. Korban is a Ukrainian businessman and former deputy of oligarch Ihor Kolomoisky, whom Ukrainian President Petro Poroshenko removed as governor of Dnipropetrovsk earlier this year.

“Pensions have plummeted from $500 to $150 a month,” Korban said. “The opposition plays on people’s dissatisfaction with the revolution. After Maidan the corruption has gone from the bottom up; we just changed the flow of corruption.”

“It was good to take out Yanukovych,” said Soslan Bekoev, a lawyer in Dnipropetrovsk, referring to deposed Ukrainian President Viktor Yanukovych. “But it’s more than one year later, and nothing has changed.”

On Oct. 25, Ukraine will hold national elections, including all local government positions. Many consider the October elections a key test of Ukraine’s democratic reforms and a bellwether of the country’s chances for a prosperous and peaceful future.

There are concerns that if the elections do not produce significant changes, internal tensions could reignite.

“Our country wouldn’t survive another revolution,” said Svyatoslav Oliynyk, a former deputy of Kolomoisky, in an interview. “The time for these changes is right now.”

Decentralization of governmental powers will be one of the key campaign issues this October. On July 16, the Verkhovna Rada (Ukraine’s parliament) overwhelmingly approved draft constitutional amendments to decentralize governmental power. One key element of the amendments was to give local communities access to their own bank accounts for discretionary spending.

Speaking to reporters in Kyiv on July 15, U.S. Assistant Secretary of State for European and Eurasian Affairs Victoria Nuland said the decentralization amendments were an important step to “de-Sovietize, de-oligarchize the country—to liberate Ukraine from the structures of the past and bring it closer to Europe.”

Nuland added: “It will bring more opportunity for all the regions of Ukraine to control their own future, to have more power in budgeting, to take the kind of responsibility for improving quality of life at the local level—the quality of democracy at the local level—and to bring growth to the local economy. My country is a country that is very decentralized, as you know. And we believe that people at the community level know best what is right for their people. That when government is close to citizens it is strongest.”

Back in the Mariupol basement, Andrushchenko extolled the value of participating in the local democratic process.

“Nobody can force you to change,” he said. “You have to be inspired to make a change. It requires sacrifice, and it requires you to make a contribution. But if we never even try, we will never achieve anything.”