From Sea to Shining Sea: 5 Examples of Voter Fraud across America 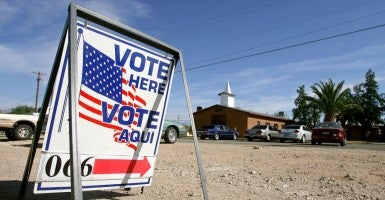 Contrary to the assertions of many, voter fraud is not a myth.

It is a stark reality that exists nationwide, from the rural counties of Georgia to the urban centers of New York.

The Heritage Foundation has documented nearly 250 cases where nefarious citizens, officials, candidates and campaign operatives conspired to commit vote fraud, compromising the integrity of our elections to achieve their ideological goals.

That list is just a tiny sampling of voter fraud, and it keeps growing. In May, the Heritage Foundation highlighted several recent cases.

Here are some of the egregious new additions to the voter fraud database:

Walter Coiner, a business owner in southern Idaho, tried to vote twice in the 2008 general election. Coiner voted in person in his home town of Ketchum, and cast an absentee ballot in nearby Twin Falls. Coiner’s ruse was discovered, and he pleaded guilty to misdemeanor voter fraud charges. A judge sentenced him to one year of unsupervised probation, 40 hours of community service, and he was slapped with a $375 fine.

Not to be outdone, William Greg Eason of Tallahatchie County, Mississippi bribed voters with beer and money to cast fraudulent absentee ballots for a district supervisor candidate in a 2003 run-off election. A jury found him guilty, and he was sentenced to two years in prison, a punishment that also clearly reflected the severity of the offense.

Voter fraud and its ill effects are not limited to elections for local offices. On the contrary, voter fraud can and often does occur in connection with elections to the nation’s highest offices. In Lincoln County, West Virginia, Circuit Clerk Greg Stowers and five other Democrats were charged in 2005 with participating in a conspiracy to buy votes in congressional and presidential elections dating back to 1990.

The men paid for votes in liquor and cash (typically $20 per vote), handed out slates listing preferred candidates, and performed favors for supporters. All six eventually pleaded guilty to these charges in 2006, and Stowers was sentenced to six months in federal prison.

A case out of Georgia shows that voter fraud has the power to steal an election from the rightful victor.

Raney won the election against Larry Pickett by only 27 votes. Raney and Brown were fined $158,000 and $20,000, respectively. Despite the fraud, the election results were never officially overturned, and Raney did not resign his city council seat until nearly two years later, in September of 2009.

Martia Yvonne Phillips and eight others in Iowa pleaded guilty to voting in the 2008 election despite being convicted felons who had not had their voting rights restored. Phillips voted while still on probation for a 2006 felony drug conviction. She was subsequently sentenced to five years in prison, a sentence that was suspended to two years’ probation.

Voter fraud clearly exists in many forms and in many places despite earnest efforts by some authorities to crack down hard on offenders. Moreover, voter fraud is easy to commit and tough to investigate after the fact, particularly when inadequate safeguards exist to detect the crime in the first place.

That is why it is important for state legislatures to enact commonsense legislation designed to combat voter fraud before it can distort an electoral result. Voter ID laws—which many liberals love to criticize, but which a majority of Americans across ideological lines support—are an answer to many types of voter fraud, including fraudulent use of absentee ballots.

But other measures are also needed, such as requiring proof of citizenship to register and verification of the accuracy of voter registration information.

Critics often argue that laws intended to uphold the integrity of elections are ineffective and unnecessary.

But take the case of Carol Hannah of Colorado. Hannah was registered to vote in Mohave County, Arizona and Adams County, Colorado and was convicted of voting in both states during the 2010 election. Hannah’s double-voting was detected by the Interstate Voter Registration Crosscheck Program, a system that examines shared voter data from more than 25 states and checks for identical name and date-of-birth matches to ensure the accuracy of voter rolls and to ensure that individuals like Hannah cannot unlawfully double-dip.

In that case, the program did exactly what it was designed to do. Hannah was sentenced to three years of supervised probation and ordered to pay a $1,000 fine.

Democracy is one of America’s finest traditions; voter fraud is not.

The implications of these cases are clear: election fraud exists, and it is neither isolated nor inconsequential. We can and must take steps to detect and deter this problem.

This story originally contained a voter fraud cause from Kentucky that has been removed due to a cconviction being overturned on appeal.