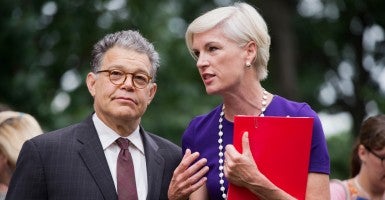 Planned Parenthood donated $679,596 through its PACs and affiliates to pro-choice candidates in the 2014 election cycle, according to the Center for Responsive Politics, a research group that tracks money in U.S. politics.

The Center for Responsive Politics compiled the data using figures released by the Federal Election Commission and the Internal Revenue Service.

Here are the biggest recipients of funds from Planned Parenthood:

According to the Center for Responsive Politics, the lone Republican recipient of Planned Parenthood funds was Rep. Richard Hanna, R-N.Y., who received $2,823.

Planned Parenthood is under fire after two undercover videos were released by the Center for Medical Progress. Republican members of Congress have called for Planned Parenthood to be investigated and defunded in light of the allegations brought forth by the videos.

The first video of a Planned Parenthood executive, Dr. Deborah Nucatola, shows her discussing the sale of fetal organs such as hearts, lungs and livers. Nucatola estimated a price of $30 to $100 “per specimen.” A second video, released today, shows Dr. Mary Gatter, president of Planned Parenthood’s Medical Director’s Council, saying she doesn’t want to “lowball” the price of an aborted fetal part.

With a new video surfacing today, Republicans are likely to increase their demand that Planned Parenthood face additional scrutiny.

In a statement, Sen. Rand Paul, R-Ky., pledged to defund the organization.

“The continued disregard and disrespect for human life at Planned Parenthood, a partially taxpayer-funded organization, is shocking and appalling,” Paul said. “Recent video revelations, involving potentially criminal activity, make it more obvious than ever that this organization has absolutely zero respect for the sanctity of human life and is an affront to the most basic human dignity enshrined in our founding documents. Not one more taxpayer dollar should go to Planned Parenthood and I intend to make that goal a reality.”

Paul promised to “use all legislative vehicles at his disposal” to have the Senate vote to eliminate taxpayer funding for Planned Parenthood.

Meanwhile, leaders on the House Energy and Commerce Committee want Nucatola to brief the committee.

“Dr. Nucatola’s statements raise most troubling questions with regard to your organization’s practices when performing abortions and whether those practices are consistent with federal law, including those laws restricting partial birth abortions and the sale of human fetal tissue,” the members wrote to Planned Parenthood’s Richards.