Iran Deal to Be Sent to UN Security Council Before Congress: A Deliberate Insult by the President 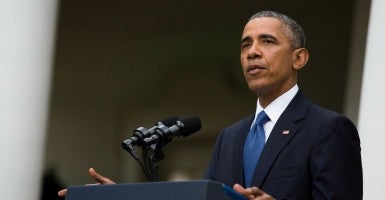 According to news reports, the Obama administration is currently circulating a draft United Nations Security Council resolution to implement the commitments agreed to under the Iran nuclear deal known as the Joint Comprehensive Plan of Action.

The expectation among other Security Council member states is that the U.S. will seek a vote on the resolution in the Security Council in the near term before Congress has had an opportunity to review and act on the agreement as outlined in the Iran Nuclear Agreement Review Act of 2015, which President Obama signed into law.

The Iran Nuclear Agreement Review Act of 2015 states the during the review period, the “President may not waive, suspend, reduce, provide relief from, or otherwise limit the application of statutory sanctions with respect to Iran under any provision of law or refrain from applying any such sanctions.”

U.N. Security Council sanctions are not U.S. statutory sanctions, but the clear intent of the legislation is to prevent any sanctions relief until Congress has reviewed the deal.

No doubt the Obama administration justifies its haste on these provisions of the JCPOA. But “promptly” and “without delay” do not necessarily mean immediately.

Indeed, all negotiating parties are aware of the Obama administration’s commitment to give Congress time to review the deal. It is reasonable to argue that promptly means immediately after the procedures outlined in the Iran Nuclear Agreement Review Act of 2015 are complete.

The parties have negotiated this deal for well over a year breaking numerous deadlines, what are a few more weeks at this point? The clear intent is to give the impression of inevitability and pressure Congress not to, in the words of President Obama, veto “the judgment of 99 percent of the world community.”

A matter of this significance deserves careful deliberation. Once the Security Council takes action on this matter, it will rescind seven painstakingly negotiated Security Council resolutions adopted over the past decade.

It will also start the clock on a cascade of sanctions relief commitments by the U.S. and the European Union.

Once started, the possibility of re-erecting this sanctions framework is vanishingly small. Even if the snapback provisions in the agreement work as described, given the incentives for key parties and commercial interests to avoid re-imposition of sanctions, they will only be viable after proof of Iranian violations are grossly evident.

Meanwhile, more than $100 billion in frozen Iranian assets will be released over the next year.

Moreover, the terms of the provision would “not apply with retroactive effect to contracts signed between any party and Iran or Iranian individuals and entities prior to the date of application.”

In other words, the sanctions snapback would only apply to activities occurring after it is triggered—everything prior is exempted. Investments and agreements adopted prior to the snapback will, presumably, continue unabated and unaffected.

Going to the Security Council prior to congressional consideration signals the administration’s intent to proceed regardless of whether Congress supports or opposes the agreement. Although within the executive’s authority as the U.S. representative on the Security Council, such an action would be a deliberate insult to Congress and a breach of the president’s commitment to work with Congress on this matter.

As stated by Rep. Ed Royce, R-Calif., chairman of the House Foreign Affairs Committee, and Rep. Michael McCaul, R-Texas, chairman of the House Homeland Security Committee, in a letter to the president, “It is distressing that your administration would afford Russia and China the opportunity to vote on the final agreement before the American people’s representatives do. The full 60-day review period and parliamentary procedures prescribed by the Iran Nuclear Agreement Review Act should be allowed to play out before action at the Security Council.”

Hopefully, the president will heed this advice, but unfortunately the president has demonstrated repeatedly that he will circumvent Congress at every opportunity.

Reportedly, the administration again wants to circumvent the treaty process to implement a climate change agreement to be finalized this December.

If Congress wants to be taken seriously as a co-equal branch of government, it needs to reject this fatally flawed Iran deal and use its power of the purse to rebuke and limit the administration when it oversteps.